There's talk in town of an Orc named Mazoga who claims to be a knight. You can find her in the Leyawiin Castle County Hall, but she won't tell you much until after you've spoken with Count Marius Caro. Speak to the Count and he will ask you to find out what Mazoga wants. Speak to Mazoga, (who demands that you call her 'Sir', even though she is a woman) who wants you to find a local hunter named Weebam-Na, and bring him to her.

Report your findings to the Count and he'll ask you to find Weebam-Na. He tells you Weebam-Na is a well known hunter who has a house in town. Find Weebam-Na. He won't want to cooperate at first, but after a little persuasion he'll be curious to go see what this is about. Mazoga demands that Weebam-Na take her to Fisherman's Rock but she won't divulge why, so he refuses to take her, although he will give directions. If you talk to Weebam-Na after this, he will say, "Good luck with Mazoga," and makes a hasty retreat. 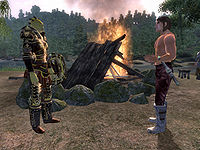 Mazoga the Orc and Mogens Wind-Shifter have a nice chat

Talk to Mazoga again and she'll demand that you take her to Fisherman's Rock. She says Mogens Wind-Shifter has a camp there and she needs to talk to him. She also says that she doesn't want any head-bashing before she finishes talking, which makes you suspect that there will be some fighting. Fisherman's Rock is a short run north of town on the eastern river bank. When you arrive there with Mazoga, she'll start to talk to Mogens and accuse him of murdering her friend, Ra'vindra. She then starts a fight and she'll need help with Mogens' gang of four (Mogens, J'Baasha, Mensa Selas, and Ayisha), who will attack you as well.

After the battle, Mazoga tells you the story of how her best friend was murdered by Mogens and his gang after Ra'vindra told the city guard about them. Mazoga then became a self-appointed knight and swore an oath of vengeance. She says you can keep all the bandits' gear, suggests perhaps you should become a knight yourself, and then heads back to Castle Leyawiin. Report to the Count to receive his gratitude. As a reward, he offers you an opportunity to become a Knight-Errant of the White Stallion. This then leads to the Knights of the White Stallion quest.