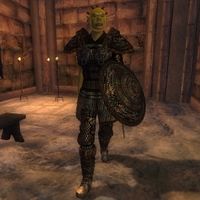 Mazoga the Orc will initially be encountered in Leyawiin, insisting somewhat insecurely that she is a knight. Talking with her or with city guards leads to the quest Mazoga the Orc, during which you will learn a bit more about her less-than-chivalrous past, and give her (and yourself) a chance to become a real knight.

Mazoga wears a set of heavy armor (boots, cuirass, greaves, and shield) which is always the best available quality (based on your level). She carries a longsword, which is also of the best available quality. She also carries four restore health potions, another random potion, and a pair of leveled lower-class pants. After you kill Black Brugo and are both named Knights-Errant, she will also carry a Leyawiin shield and a key to the White Stallion Lodge.

After you have completed the quests involving her, you will not be able to interact with her anymore. Her only response is: "I'm gonna go get me some black bows. Tag along if you like."