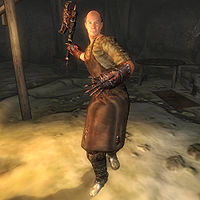 The Forgemaster is in charge of the production of material for the Drothmeri Army. He and his two apprentices have already churned out a large quantity of iron armor but still have a lot more to produce. Evidently stressed about his workload, he will attack you on sight.

He wields a blunt weapon and wears heavy boots, gauntlets and greaves, all of which are leveled and possibly enchanted. He also carries several leveled potions and poisons. Of most interest, though, are the two unique items in his possession: the Forgemaster's Amulet and the Forgemaster's Smock. Even more importantly, he keeps one of the two enchanted bezoars necessary to advance into Varsa Baalim inside his tent.