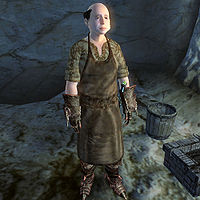 The Weapons Apprentice is one of two apprentices of the Drothmeri Army's Forgemaster, the other being the armor apprentice.

He wields a blade in combat and wears heavy boots and gauntlets, both of which are leveled. He also wears blacksmith's pants and a blacksmith's apron. He carries a repair hammer at all times in readiness for work.

He seems to have a rivalry with the other apprentice: one of them has sent their master a note accusing their counterpart of skulduggery.