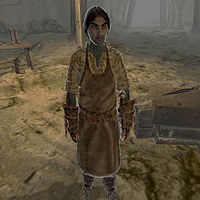 The Armor Apprentice is one of two apprentices of the Drothmeri Army's Forgemaster, the other being the weapons apprentice. He is evidently feeling somewhat unhappy with the limited number of chances to advance his skills, as shown by the letter he has sent to his sweetheart in Suran, unaware that in his absence she has had to start working at a less than savory establishment.

He wears a blacksmith's apron and a pair of blacksmith's pants. He also wears leveled heavy armor boots and gauntlets. In combat he wields a leveled one handed blunt weapon. He also carries a repair hammer, as every blacksmith uses to ply their trade.

He seems to have a rivalry with the Forgemaster's other apprentice: one of them has sent their master a note accusing their counterpart of skulduggery.