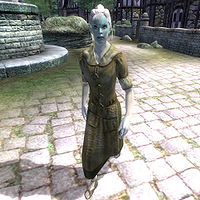 Llevana Nedaren is a Dunmer farmer living in Cheydinhal. She is the only one in town who vocally opposes the corrupt practices of the local City Guard, and if she had her way, the captain of the guards, Ulrich Leland, would be dragged out into the street and killed. You have the option to let her do just that during the Corruption and Conscience quest, although there's a cleaner way of dealing with the situation that does not result in her doing jail time for murder.

She wears a set of lower class clothing consisting of a collared shirt, green felt linens, and a pair of huntsman moccasins. She carries her key, a bread loaf, and a small amount of gold.

Llevana uses her friend Aldos Othran as the prime example of Ulrich's crimes. She'll be happy to explain Aldos' backstory: "Take my good friend Aldos Othran for example. In the last month, he's been fined six times! SIX! All for being drunk and disorderly. Have you ever gone past a guard barracks? When are they NOT drunk and disorderly? What kind of a stupid fine is that? Well, Aldos couldn't pay his last two fines, so they seized his home and threw him into the street until he could pay it! Bastards! Poor fellow. You may be able to find him roaming the streets of Cheydinhal, probably drunk. Only a month ago, he lost his wife. They were traveling the road from the Imperial City when a bandit raiding party struck. He barely escaped alive. Ever since then, he's been drunk. Sure, he gets rowdy sometimes, but he's never hurt anyone." After his untimely death attempting to retake his house, Llevana will know something is up as soon as you see her next: "Is something amiss? You have an ashen look on your face that tells me so." She'll be grief stricken at the news and cry, "Oh no! They killed him! I can't believe this! Ever since his wife passed at the hands of the bandits, his life has been miserable. I'd grown to become fond of him. I wanted to take him into my house, but I was afraid. And now look what's become of him." She'll add sadly, "I'll make the necessary arrangements for his burial. He'll be buried next to his poor wife."

There are multiple ways the quest can end; Llevana has her own very clear ideas regarding that fact. She will be all too glad to rid the city of Ulrich Leland forever. She will task you with leading Ulrich to her home, where she will paralyze him. She will then call some vicious pets to eat him alive: "As you wish, Ulrich. Come my lovelies! Your feast has arrived!"

If you listen to Garrus Darelliun instead, and find evidence of Ulrich's crimes, afterwards she will tell you: "I'm overjoyed to hear that Garrus has replaced Ulrich as the Captain of the Guard. I'm sure he'll do a fine job." When asked specifically about Ulrich, she mentions that, "Though I'm happy that Ulrich has been removed from his post, I am still sad there'll be no true retribution for Aldos. When I was younger, and living in Vvardenfell my parents instilled in me the code of an eye for an eye. It's hard not to see that through. I'm sorry I shouldn't berate what you've done for Cheydinhal. Everyone appreciates what you did, as do I."

Citizens of Cheydinhal buckling under the weight of Ulrich's taxations will beg you to seek out Llevana with, "If you're interested, go talk to Llevana Nedaren. She seems the most outspoken against Ulrich and his new fines." If Llevana ends up killing Ulrich for his greed, the townsfolk will comment, "So, the mighty Ulrich Leland has fallen. Apparently Llevana Nedaren snapped and killed him. Good riddance I say." However Garrus Darelliun won't be quite as impressed, and restate his insistence that "Llevana has always been quick tempered. You must reconsider her plan. It can only lead to prison for her... and for you."