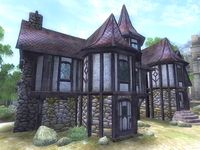 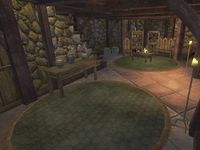 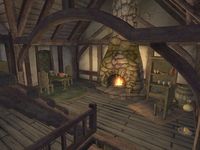 It is a 3 story house, with a separate basement area, whose owner takes part in Corruption and Conscience. 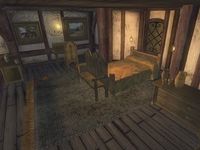 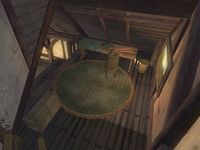 Just inside the entrance sits a clutter barrel and a non-respawning clutter sack. The sitting area in the north end of the first level holds two wine racks with six bottles of cheap wine and three bottles each of Tamika's West Weald Wine and Surilie Brothers Wine. Another bottle of Surilie Brothers is on the low table. A copy of The Argonian Account, Book 2 lies on the shelves next to the door to the basement, in an alcove next to the stairs.

Another copy of the same book lies on another bookshelf on the second floor, in the southwest corner next to the fireplace. The barrel and non-respawning sack nearby both contain clutter, and a cheese wedge is lying on the floor. The dining area in the southeast corner holds a table set with nineteen strawberries, four blackberries, three apples, and a loaf of bread, with two more cheese wedges on the floor. The alcove on the east wall holds two non-respawning sacks, one with clutter and one with grains. The cupboard contains drinks, and the shelf with drawers holds food. Another loaf of bread and two pieces of venison sit on the table.

The sleeping area in the north end of this level holds a desk with clutter and two chests of drawers; the one on the east wall contains clutter and the one on the west wall contains clothing. Two pairs of shoes, one pigskin and one quilted, sit on the floor. The third level holds a non-respawning chest that contains gold and possibly jewelry, and a blue and green outfit on the table.

Llevana's basement is a small room separated into two areas. The first area holds a barrel and crate with clutter and a non-respawning chest that can contain armor and weapons. The second area holds four more clutter barrels, two clutter crates, a food barrel, and a set of two wine racks that hold three bottles of Tamika's West Weald Wine and two bottles of Surilie Brothers Wine. A final bottle of cheap wine sits on a crate. For some reason, her basement is the property of the Orum gang.