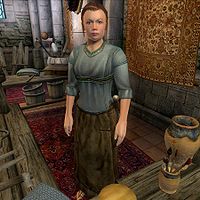 Jensine in her store

Jensine is a Nord pawnbroker and proprietor of Jensine's "Good as New" Merchandise in the Market District of the Imperial City. She is also the chairwoman of the Society of Concerned Merchants and is very outspoken against newcomer Thoronir's under-priced selection. Unfortunately, she's not nearly as outspoken when it comes to testifying against an Imperial Watch Captain who stole all the money from one of her customers. Jensine also sells the unique item, the Akaviri Warblade, a two-handed blade that damages fatigue, health, and magicka.

Jensine wears a blue collar shirt, coarse linens and a pair of sack cloth sandals. She is armed with an iron dagger and carries her shop key and a small amount of gold.

Like so many of her fellow merchants in the District, Jensine lives a life of hard work maintaining her store, leaving her very little spare time. She sleeps in the Private Quarters every night between midnight and 6am and always starts the day with a two-hour breakfast in the main trading room. At 8am, she unlocks the door and spends the next twelve hours offering her popular bartering services to customers. On all normal weekdays (Morndas to Fredas) she closes up shop at 8pm and spends the rest of the evening at The Feed Bag, chatting and dining with the other traders. On Loredas and Sundas, she adds four extra hours to her usual opening time and keeps the shop open until midnight.

When you meet her for the first time, before the Unfriendly Competition quest, she will greet you with like this: "Feel free to browse, friend. It's nice to see a new shopper. I was afraid I lost any hope of new business ever since Thoronir opened up." After having explained the problem in-depth, she will share her own theory: "His inventory must be stolen. It has to be. He prices less than it costs to make some of those things. Go see for yourself." After you have sorted the whole morbid mess out, she will tell you that "In your absence, Thoronir visited and we spoke at length about his role in this scheme. I believe him when he says he didn't know Agarmir's sources. He told me of his intentions to donate all of the money and inventory to the local temple. He also agreed to buy and sell merchandise at fair prices. Last but not least, he's officially joined the Society. I am taken aback by his honest intentions. In return, the Society has decided not to press charges. His name will be absconded from the records of this crime." And she will add: "I'm mature enough to admit I was mistaken about Thoronir. He's a welcome member of our group in the Market District."

During the Imperial Corruption quest, you will have to seek out Jensine once again, as she is the only witness to Audens Avidius' crime against Ruslan and Luronk gro-Glurzog. Ruslan will tell you about the deed: "Luronk and I were shopping at Jensine's when he accused us of stealing. Even Jensine said we were innocent, but he didn't care." And Luronk will enlighten you even more: "He's shaken down most of the shopkeepers in the Market District. They're all too afraid of him to do anything. Jensine wouldn't even talk about it." And he is right, because when you approach Jensine, she will say: "Ruslan and Luronk. Those idiots don't know when to stay quiet. Look, I'm not telling you anything, stranger. I don't trust you." Luckily, there's ways to raise her disposition and then she will say: "I guess I can trust you. It's that bastard Audens Avidius. He's in here every month taking my wares without paying for them. What can I do? He's a Captain of the Imperial Watch. Only another Watch Captain can arrest him. Fat chance of that happening." But even if Audens represents a real problem for her, she is still unwilling to testify against him: "You want me to publically [sic] accuse Audens Avidius of corruption? I'd sooner swim naked in a pool filled with slaughterfish and mudcrabs!"