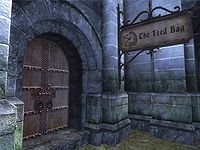 The Feed Bag is a bar in the Imperial City's Market District. It is found across the street from A Fighting Chance and next to Jensine's "Good as New" Merchandise and Red Diamond Jewelry. 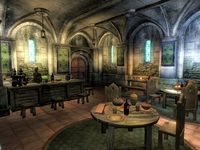 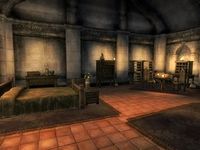 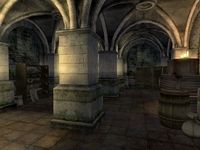 The publican, Delos Fandas, buys potions and food, while only selling the latter. He has 50 gold and a mercantile skill of 40. Many of the Merchants within the Market District come to the Feed Bag when their shift is over to talk and have a drink. Occasionally, Imperial City citizens can be heard saying: "The Feed Bag isn't fancy, but it fills you up."

The main reception area is on the ground floor. Delos won't rent any rooms; instead, the second floor holds his private quarters, as is usual with Imperial City houses and stores. The basement offers more storage below.

The bar at the main entrance holds three cheese wedges, two ears of corn, two slices of ham, two potatoes, and a loaf of bread, along with five bottles of cheap wine and five bottles of mead. The table on the southwest wall behind the bar holds four heads of lettuce, a watermelon, and three bottles of mead, while the set of shelves beside it holds four radishes, two potatoes, and rice. A clutter barrel and two non-respawning clutter sacks sit in the south corner near the door to the basement.

A table in the north corner is set with two loaves of bread, two potatoes, a cheese wedge, and two bottles of skooma. A clutter barrel and two more non-respawning clutter sacks sit in the corner behind the table, along with a wine rack sitting on top of a smaller table that holds eleven bottles of cheap wine. In the east corner sits two crates, a cupboard, and a non-respawning sack, all containing clutter, as well as a barrel that holds food.