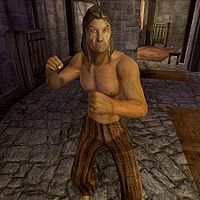 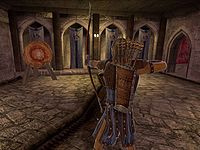 Blue Team Gladiator is a Dunmer who lives in the Arena Bloodworks. He alternates between practicing his Marksman and his Hand to Hand skills.

Most of his day is devoted to training for the Arena. He wakes at 6am and eats breakfast for two hours, and then from 8am until 3pm he practices Hand to Hand using a punching bag. He then practices Marksman by shooting arrows at one of the targets before he finally heads to bed at 1am.

When you first meet the Blue Team Gladiator he will warmly greet you, but strangely will not mention his name: "Oh, hey there! Nice to make your acquaintance. I'm... Well, my name's not important, really. I'm a combatant in the Arena. Gladiator rank." Asking him about the Arena while you are not a member of the Arena faction will have him reply: "The Arena is the bloody jewel of the Imperial City. It's where all the best fighters from all over the Empire come to test their skills. If you think you've got what it takes, go talk to Owyn, the Blademaster. You'll find him in the Bloodworks, day and night. But stay away from Ysabel, the Battle Matron. She doesn't deal with combatants, unless they want to challenge the Grand Champion." The Arena quest will be added to your journal once he finishes this line of dialogue. Asking him the same question after you are a member of the Arena will have him reply: "It's our home away from home, isn't it? I guess you could say the Blademaster and Battle Matron are our mother and father, huh? Ha ha ha ha ha!" You may also ask the Blue Team Gladiator additional questions about the Battle Matron, the Blademaster, and Gaiden Shinji. If you question him about the Battle Matron he will reply: "That's Ysabel. She's sort of the Arena den mother. She handles the logistical stuff, as well as the training of the Grand Champion." Asking of the Blue Team Gladiator's opinion on the Blademaster will have him say: "That's Owyn. He is in charge of the Arena. Arranges the fights, trains combatants, that sort of thing. Been that way since Gaiden Shinji." Asking him about the original Blademaster, Gaiden Shinji, will have him reply: "Who is Gaiden Shinji? Are you serious? Gaiden Shinji was the first Arena Blademaster. It was he who oversaw construction of the Arena, back in the First Era. The Arena was... his dream. To this day, an Arena combatant lives by Shinji's credo: 'The best techniques are passed on by the survivors.' To be the best, learn from the best. Ironically, Shinji himself was killed, shortly after the Arena was completed. Even he could not survive the Thirty-Year Siege of Orsinium."

The Blue Team Gladiator will often offer supportive comments on your progress throughout the Arena ranks:

Despite his previous friendly comments and encouragements he will take up a different attitude when you beat The Gray Prince, at which point he will angrily state: "You... You killed Agronak. The Gray Prince is... dead. He... He was my friend, my mentor... Congratulations, Grand Champion. Hope it was worth it." Despite your earlier friendship with your fellow Arena member he will refuse to speak to you any further for killing The Gray Prince.