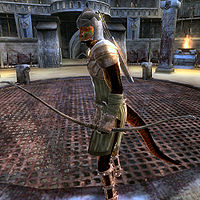 Your third opponent, an Argonian archer

This page lists all the various combatants you will face as you progress through the Arena.

Each Arena combatant has the following abilities:

** Unlike most Arena gear, these may be picked up after the fight.

* Elven and Orcish are mixed up here, so you will sometimes see enemies who should be using heavy armor with an Elven Shield.

Arena Raiments are full armor suits, covering upper and lower body, as well as hands and feet. Thus the only other apparel items that can be worn along with it are helmets (or hoods), shields, and jewelry.

* Worn by Yellow Team combatants.
** Since Agronak's Raiment is a quest item, its weight in your inventory will normally be zero.

* The Gladiator's Sword is not actually found anywhere in the game.
** Shimmerstrike's enchantment name in the Construction Set is called "Shimmerthorn", suggesting a previous name for it.