Ruins of the first Orsinium circa 2E 582

After a while, the Orsinium army grew determined to capture the Bjoulsae River and force the kingdom of Wayrest to provide compensation for its services. Naturally, this did not settle well with their neighboring kingdoms, especially the Kingdom of Daggerfall. In 1E 948, King Joile of Daggerfall sent a letter to Gaiden Shinji of the Order of the Diagna, which proposed a joint attack on Orsinium. Agreeing to provide aid, an alliance was formed between the Order of Diagna and the armies of Daggerfall (High Rock) and Sentinel (Hammerfell). The armies amassed and began a campaign for the destruction of Orsinium.[6][7] During the campaign, which became widely known as the Siege of Orsinium, the Breton armies of Daggerfall, the Redguard soldiers of Sentinel, and the Yokudan Order of Diagna invaded the Orc homeland. The Orcs gave much resistance and proved themselves to be fearsome and brutal warriors, just as they did in the past. However, king Joile of Daggerfall already planned to betray the Redguards and invade Hammerfell after having destroyed Orsinium. He and his Reachman general, Mercedene of the Winterborn, tricked the Orcish hero Baloth Bloodtusk and his Savage Sons, who initially did not take part in the war, to join King Golkarr of Orsinium. Afterwards, he manipulated the leader of the Order of Diagna, Gaiden Shinji, into having a duel with Bloodtusk over Orsinium's fate. During the duel, Mercedene ordered Joile's archers to kill both combatants, effectively removing the most powerful warriors of both Orsinium and the Order of Diagna for Joile.[2] Eventually, after a 30 year siege, the allied forces breached Orsinium and overran the city, completely razing it in 1E 980. King Joile then executed his plan of invading Hammerfell, but he was defeated and killed at the Bangkorai Pass by the Ansei warrior Makela Leki.[8] Although the siege marked the destruction of Orsinium, the Orsimer homeland would rise again.[6][7] 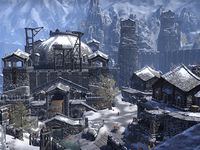 The first Orsinium was rebuilt and razed again at least two more times.[9] The land briefly became an Imperial province under the rule of the Akaviri Potentate.[1][2][10] During that time, Frostbreak Fortress was built to help defend it.[9] After the assassination of Savirien-Chorak in 2E 430, the province ceased to exist, and Orsinium was destroyed once again.[1] At some point after that, Orsinium got under control of the first Daggerfall Covenant. When King Ranser of Shornhelm attacked Wayrest in 2E 566, King Emeric of Wayrest sent emissaries into Wrothgar and promised to return Orsinium to the Orcs in exchange for helping him defeat Ranser. The clan of Kurog gro-Bagrakh answered his call and helped annihilate Ranser's forces at Markwasten Moor. These events led to the formation of the Second Daggerfall Covenant, and Orsinium, ruled by King Kurog, became a part of it.[11][12]

Kurog chose to rebuild the city in another location, in the mountains of eastern Wrothgar, on the border with Skyrim. In 2E 582, he sent invitations to the mightiest warriors of Tamriel to come and help him build the united Orc nation. One of the warriors who came was the Soulless One, who helped Kurog drive the Winterborn out of Wrothgar. However, Kurog, angered by the constant discord between the clan chiefs, and manipulated by his mother Alga, reached for desperate measures. He orchestrated an attack of Malacath cultists on the temple of Trinimac in his city, and pinned the blame on Bazrag gro-Fharun, chief of a Malacath-worshipping clan and Kurog's political opponent. Simultaneously, he commanded Vosh Rakh, a brutal and violent cult of Trinimac who were led by his mother Alga, to attack Fharun Stronghold and tried to imprison Bazrag. He also made the Soulless One convince the chiefs of Morkul, Shatul and Tumnosh clans to attend his moot, where he planned to murder them. The Soulless One eventually learned about Kurog's treachery, and aided Bazrag in stopping him. The Soulless One then succeeded in saving some of the chiefs at the moot, and killing Kurog and Alga. Afterwards, Bazrag became the new king of Orsinium, who promised to continue working on Kurog's vision of a united Orsimer people equal to the other races, while also trying to retain peace and not forcing this vision on anyone.[2] Since Orsinium's membership of the Daggerfall Covenant was based solely on the agreement between Kurog and High King Emeric, the kingdom nominally left the Covenant with the crowning of Bazrag. It is unknown if he was able to renew the agreement.

Ficheiro:DF-Orsinium.png
The stronghold of Orsinium circa 3E 417

At some point later, the Orcs again lost control of Orsinium. The land was then won back by the Orc hero Gortwog gro-Nagorm in 3E 399, who was disputing claim on the land, made by the Breton noble Lord Bowyn. Gortwog won the land by defeating Lord Bowyn in a duel.[13] The city was rebuilt on a mountainside between Menevia and Wayrest, at the site of Torug's original Orsinium.[3][7] As the city harbored statues of Orc heroes such as Mauloch and Torug, and was built of iron, it was likely that Nova Orsinium would provoke the same reaction from its neighboring kingdoms as the first city did. However, the land prospered, as Gortwog proved to be a diplomatic as well as a political genius. Following the events of the Miracle of Peace, Gortwog used the Numidium to conquer substantial territory of central High Rock. Its application for elevation to Provincial status, which was proposed to Tiber Septim at the founding of the Empire, was finally beginning to be reviewed by Emperor Uriel Septim VII. Orsinium's recent alliance with its former foe Wayrest gave promise for a stable future and a lasting government.[7] Gortwog sent out many adventurers to explore the dungeons of Tamriel in search of treasure, to prove the wealth of the orcs.[14]

However, this was not to be. Orsinium was once again sacked by the combined forces of Hammerfell and High Rock in the early Fourth Era, and many Orc refugees fled east into Skyrim.[15] The kingdom reformed, but has relocated; it is now in between Skyrim and Hammerfell.[4]