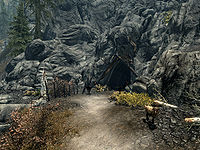 Snapleg Cave is a medium-sized cave carved into the side of a mountain.

It is located to the far east of Ivarstead, northwest of Rift Watchtower and south-southeast of Darkwater Pass.

There is an iron ore vein a few paces downhill to the north of the entrance and several patches of mountain flowers and a scaly pholiota fungus growing from the rotten tree trunk around the entrance. The entrance is marked with typical sharpened stakes and other symbols typical of Hagraven. 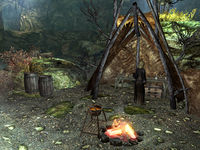 The entrance leads into a short tunnel descending to the south and opening out into a sinkhole marked with the heads of two skeevers on stakes, An earthen ramp descends to the right. At the bottom there are three live skeevers feasting on a dead deer. The passage onward is to the south and is eerily lined with taproot talismans hanging on the walls. Ahead the tunnel turns to the east before opening out into a chamber with a grisly elk head mounted on mammoth tusks. This display marks a small encampment with two tents, both occupied by hags. A skeever, frostbite spider, or troll will also be wandering around the camp.

A cooking pot is simmering on a stand beside a fire in front of the first tent. Inside, a table has a random potion of magicka, a bowl of frost salts and a goat hide. Under the table is an unlocked chest. To the left of the first tent is a rock formation, on top of which is an open crate hidden behind some foliage; the crate contains a Staff of Paralysis, four soul gem fragments, a deathbell flower and a potion of strength. The second tent is to the east of the first, but only displays more trophy heads.

The exit is to the south. A random potion is on the ground just to the left of the mouth of the tunnel. The tunnel twists and turns a fair amount, until a mass of light cobwebs in front holds a desiccated corpse. At this point the tunnel turns to the right, by a patch of fly amanita fungus, more of which is found near the end of the tunnel and in the next chamber. There is another skeever, frostbite spider, or troll in this chamber. The remains of a mammoth are on the ground, with a mammoth skull lodged in a hole in the ceiling with hanging moss growing from it, giving credence to the “Snapleg” moniker of the cave. A spellcaster trap that fires ice spikes is to the east, next to the exit tunnel. Remove the soul gem from the pedestal to disarm the trap. To the north is a gap between rocks in the wall, through which you can see a chamber containing a chest, alchemy lab and some barrels, this is the final chamber from which is a shortcut back to the entrance.

The next tunnel has a profusion of light cobwebs and opens into a relatively large cavern infested with frostbite spiders and numerous egg sacs, two of which can be harvested. A tunnel heads north from this cavern, while to the east, at the rear of the cavern is a dead bandit in front of an unlocked chest. As you approach the bandit and chest a giant frostbite spider will descend from a hole in the ceiling and attack along with any spiders that haven't already been alerted to your presence. The tunnel heading north leads to a small area with some thick cobwebs to the west concealing an unlocked chest and to the north is a chain that opens a hidden door. 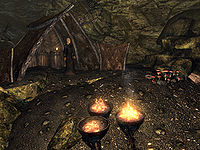 Behind the door is another chamber with a single hag in front of a tent. In the tent are three barrels with a copy of the Alteration skill book Breathing Water, a random potion of healing, a random potion of magicka, two samples of slaughterfish scales and three slaughterfish eggs on top. A second tent holds only a dead elk and two dead goats (see bugs). Just outside this tent are two barrels containing ingredients with a random potion on top of one of them. There are two fly amanita fungus patches and several hanging mosses growing in this chamber. The exit to the next room is to the southwest. 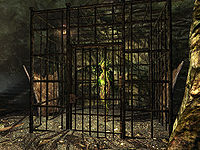 A wooden bridge spanning a small stream leads to the last occupied room of the cave. The body of a conjurer is in the water to the right of the bridge, but most notably, up ahead a spriggan is trapped in a cage behind an apprentice lock. A hagraven and a hag are in a tent farther back to the south. The spriggan will not turn hostile if you free her and makes a valuable ally against the enemies. Once the enemies are dispatched, if the spriggan survived, she flees the room. There is an arcane enchanter to the left of the tent. By the mouth of the tent is a barrel of ingredients with a random poison on top. Inside the tent is a table with two empty random soul gems and an iron dagger on top. To the right of the tent, against the cave wall is yet another barrel containing ingredients. To the west a wooden ramp leads up into final room that contains the alchemy lab, chest and barrels seen previously. The chest is unlocked and the barrels contain foodstuffs. The spriggan may be waiting by some spears blocking the way. Use the chain to the right to lower them. Exit onto a ledge overlooking the first encampment, but don't drop down off the ledge, follow it to the right and through to the sinkhole, where you can drop down right by the exit. In front of you is a column that it is possible to jump onto, but apart from being able to jump to reach a hanging moss there is nothing else of interest on this.