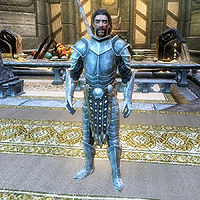 Olaf in the hall of Sovngarde

King Olaf One-Eye was a First Era Nord Jarl of Whiterun (and later High King of Skyrim) famous for imprisoning the dragon Numinex within his palace, which was dubbed Dragonsreach in honor of this feat. Olaf purportedly confronted the dragon with some of his troops on top of Mount Anthor, where he used the thu'um to aid him in a duel which ended in Numinex's defeat. Olaf then conveyed the dragon back to Whiterun where he imprisoned it in his castle, dubbed Dragonsreach in honor of this task. Numinex was purportedly imprisoned there until his death. After death, the dragon's skull was kept as a trophy, and was still on the wall above the throne in Dragonsreach, where it has remained into modern times.

Due to his fame, Olaf was eventually named High King of Skyrim. However, his reign, which started in 1E 420 and lasted 32 years, saw its share of controversy. Notably, the bard Svaknir wrote a scathing verse decrying him as a fraud and a tyrant. Olaf responded by imprisoning the bard and destroying every copy of the verse which could be found. Ancient bard texts, perhaps inspired by Svaknir, claimed that Olaf and his men came upon a weakened Numinex and captured the dragon without significant effort, and fabricated the orthodox tale to ensure his place as Jarl and possibly to aid in his bid to become High King. An effigy of Olaf is ritually burned in Solitude as part of an annual festival known as "The Burning of King Olaf". However, Olaf is still remembered in Skyrim for reuniting the province after the War of Succession and for conquering the Reach. For more information, see the lore article.

If you have completed the quest Tending the Flames, Olaf may greet you by saying: "You freed Svaknir, a fool of a poet, but an honest enemy who has earned my respect. Sadly, he's now lost in the soul-snaring mist - defeat Alduin, and his doom avert - I hope to greet him in this Hall as a friend."

He wears a full set of steel plate armor, except the helmet. He carries a steel warhammer