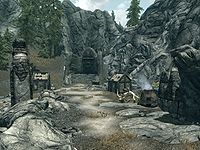 Northwind Summit is a mountaintop dragon lair on the border between Eastmarch and the Rift. It is located a short distance northwest of Shor's Stone, northwest of Riften and far south of Windhelm, on the highest point in the Rift. 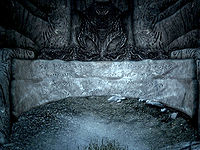 To access the summit, you can travel through Northwind Mine, found on the northern side of the mountain, or climb to it, starting at Shor's Stone and heading just a little ways south down the path until you see a slightly gentler slope of mountain to the right.

The summit is an abandoned mammoth hunter's camp with three dilapidated structures and mammoth skeletons. The word wall for the Aura Whisper shout is against the mountain, with the boss chest located just in front. A smelter is to the west, between two of the structures, and an adept-locked chest is inside the farthest structure to the west, just on the precipice of the summit. The stairs to Northwind Mine are on the northeast end of the summit. If Dragon Rising has not started, the wall is only defended by a few weak skeletons, making the word wall extremely easy to reach before starting the main quest. A dragon will be guarding the wall otherwise, and is a possible target for the related quests.

To flag this as "Cleared", try using the smelter once you have dealt with enemies and chests.