Idgrod Ravencrone is an elderly Nord mystic. She is the Jarl of Hjaalmarch and runs the administration with her husband, Aslfur, who serves as her steward. Her housecarl is Gorm. She is the mother of Idgrod the Younger and Joric.

She wears a fur-trimmed cloak, pleated shoes, and a pair of fine armguards. She is equipped with a steel dagger and also carries a selection of common items and gold.

When first spoken to, Idgrod will say: "So, life has brought you to Morthal, and to me. What purpose this serves, we will no doubt see. Welcome." Later, as you pass by, she may say, "Tamriel is full of wisdom and magic, if one is willing to look for it. Few have their eyes open.", "I speak, and others hear. It is my hope that instead they listen.", "In Morthal, there is little to rule. But there is much to teach. And so, I am Jarl.", "All this talk of rebellion and strife. Too many are focused on what might be instead of what is. It tires me to talk about it.", or "There is too much to learn in the world, too much to know, to fight over 'laws' that have no real purpose."

According to the townsfolk, Gorm, and Idgrod herself, she sees visions granted to her by the Eight, and seems to rely on these more than the opinions of her people, as evidenced in her dialogue about the resident wizard, whom she trusts even if nobody else does.

Upon first entering Morthal, Benor, Jorgen and Thonnir will be arguing with Aslfur outside Highmoon Hall, hinting at Idgrod's unpopularity. The townsfolk are concerned about her lax approach to governing, and some will readily complain about her should you inquire. In particular, Jorgen will say: "The world's going mad, and our Jarl does what? She hides inside with her 'visions'. We need a leader, not some mystic!" If you ask if he doesn't trust the Jarl, he will say, "How can I? She never speaks with us. She's allowed this wizard, Falion, to live in our midst practicing gods-know-what. And now there's talk of rebellion, and dragons? What help could Idgrod be against them? No, we can only rely on ourselves. You'd do well to remember that."

Although Idgrod is unwilling to reveal which side she is allied with in the civil war—stating that she stands with Morthal—she remains aligned with the Imperial Legion in practice. If Morthal ends up under control of the Stormcloaks, through your actions actions in either the civil war or Season Unending, Idgrod will be replaced as Jarl by Sorli the Builder. 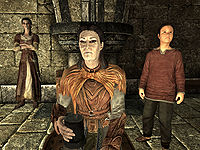 If Hjaalmarch is captured by the Stormcloaks, Idgrod, her court and her children will be exiled to the Blue Palace in Solitude like most of the Imperial-aligned Jarls, and stay there for the rest of the game (unless given over during the main quest and later retaken by an Imperial-aligned player, at which point she will resume her post as if nothing ever happened). While she is living in the Blue Palace basement, she will not be nearly as hostile as the other Jarls, and in fact take a more optimistic tone: "It is my hope that I will one day return to Hjaalmarch. But the Divines have not shown this to me," or "I try and take comfort in knowing that when all is lost, there is much to be gained." One response is not so hopeful, however: "Dark times, indeed. I fear the worst for Morthal and my people."

Upon meeting Idgrod, you will be able to choose from three topics. The first one, varying slightly depending on whether you have heard rumors about Hroggar and his burned down house from Jonna or a guard, will lead to a quest:

At this point you can inquire further, asking what Hroggar claims to have happened. Idgrod will tell you: "Hroggar blames his wife for spilling bear fat in the fire. Many folk think he set the fire himself." When you bring up the presence of his wife and child in the house, she'll reply : "Lust can make a man do the unthinkable. The ashes were still warm when he pledged himself to Alva." You can then ask why she hasn't arrested Hroggar, to which she'll reply: "On rumor and gossip? No. But you, a stranger, might find the truth for us. Sift through the ashes that others are too fearful to touch. See what they tell you. Should you prove him guilty or innocent, I will reward you." The quest Laid to Rest will then begin, unless it has started already via rumors. For quest-specific dialogue, see below.

Another option when you first speak to Idgrod is to ask her if there is trouble in Morthal, to which she will reply, "That which is unknown can cause unease, even fear. It is to be expected. Some fear our new resident wizard. As they grow to know him, they will accept him. Time will prove me right." However, she will change her tune during another quest, Falion's Secret, also detailed below.

A third option is to ask her where she stands on the war. She will be indignant: "I stand where I have always stood. Here in Morthal." Then her tone will soften a little as she tells you, "Now is not the time to fight amongst ourselves. I fear dark days approach and all of Skyrim's strength will be needed."

The final dialogue branch is regarding her visions, and will appear if you have heard about them from any of the more vocal townsfolk, or have become sufficiently ingratiated with the Jarl herself. She will say, "The Divines reveal things to me at times, yes. I do not hide this. It is a gift. Anyone who believes otherwise does not and cannot understand it."

Like most Jarls of Skyrim, Idgrod will spend almost all of her time indoors. She will only leave Highmoon Hall on two occasions, unlike her children. While within the Hall, she may have conversations with her daughter, her housecarl, or her husband.

Idgrod the Younger has only inherited a bit of her mother's gift. She has been tasked with taking care of her younger brother, Joric, who apparently inherited all his mother's talent and more. While not outside hanging around the Thaumaturgist's Hut, she may have one of two conversations with her mother inside the Hall:

Gorm is Idgrod's housecarl. He appears overprotective of his Jarl, as well as a bit nervous when her visions are mentioned:

Aslfur is both Idgrod's husband and her steward, and is protective of his wife in conversations with you, the reasons for which come to light in one conversation:

The following conversation is set to only happen while Idgrod, Aslfur and the children are in exile in the Blue Palace: 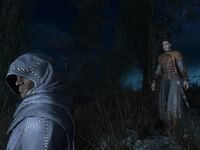 Though previously confident that Falion would be accepted by the residents of Morthal, when you inform her of more strange happenings in Morthal, she will be less tolerant herself. Telling her that Falion is up to something will result in the response: "Ah, Falion. Always looking where he shouldn't for things he doesn't need. What has he done now?" You have the option of backing out at this point, to which she will say, "I see. If something does happen, you know where I am." If you instead rat Falion out, telling her that he is casting spells out in the marsh in the middle of the night, she will take action: "Ah, so it is not just dreams then. I have seen this. I will see that it is dealt with. Thank you for bringing clarity." She then rises from her throne, exits the building altogether for the first time in the game, and proceeds directly to Falion's location, wherever that may be. She will proceed to scold him for his actions, and warn him against repeating them. However, due to a bug, she may not actually speak, but instead follow Falion around indefinitely.

Once the quest has started, speaking to Idgrod before finding Helgi inside the house will cause her to scold you for not finding anything yet: "Then stop wasting my time." After meeting the ghost, you may return to Jarl Idgrod to inform her that Helgi's ghost asked you to find her. Idgrod's response is more evidence of her "difference": "The spirit world is strong in this place. Look to the graveyard. That is where you'll find her." When you have broken into Alva's house and found the necessary evidence, report back to Idgrod. When you tell her that Alva is responsible for the fire and murder, Idgrod will, at first, be disbelieving: "Alva? Didn't think she had it in her."

Tell her of Alva's plan, and Idgrod will demand proof immediately. Once she has it, in the form of Alva's journal, she will give you a small amount of gold and ask you to eliminate the puppeteer behind the plot: "So it's true. That traitorous bitch! Morthal owes you a debt. Here. You were promised a reward for solving the crime, but I need one more favor from you. Morthal is still in danger. The journal mentions Movarth, a master vampire I thought was destroyed a century ago. I'll gather together some able-bodied warriors to clean out Movarth's lair. They'll be waiting outside for you to lead them."

When you have returned, she will confess that she thought you couldn't do it, but thank you nevertheless. 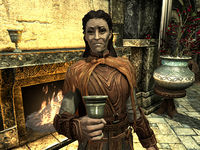 Idgrod will only attend the party if she is Jarl and you are not in the process of becoming thane (i.e., before or after the thane quest).

She is understandably wary of the Thalmor, as shown by her dialogue during the party:

Should you ask if she is having a good time, she will remark sagely, "Fair faces and fine food are well and good, but honesty is rarely so pleasing." If you ask her if she visits often, she will repeat the last line in the list above, though with an additional sentence: "There are words spoken, and words unspoken. Beware these Thalmor, for they are adept in both languages. For this reason, I avoid them when I can." When exiting conversation, she will bless you with "May wisdom light your path."

The distraction dialogue will only be available if you have completed Laid to Rest, but if this requirement is met, she will be more than happy to make some mischief on your behalf. Upon telling her you need her help with something, she will respond favorably: "My ears are always open to a friend's request." When you ask her to cause a scene and get everyone's attention for a few minutes, she'll oblige: "Nothing would please me more. I'll keep their eyes away while you do what you came here for." 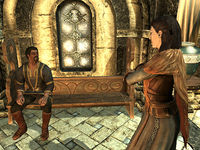 "An old woman can get away with almost anything."

Her distraction involves approaching Razelan, another guest at the party: