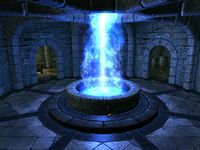 The interior of the Hall of Attainment

The Hall of Attainment is a hall in the College of Winterhold where the student sleeping quarters are located.

This is one of two halls at the college, the other being the Hall of Countenance.

Each floor is split into eight sections or cubicles. There are three cubicles on each side with the entrance and stairwell opposite each other and separating them downstairs. Upstairs the dining room and stairwell do the same. The stairwell continues up to an exit onto the roof, from which you can access a similar entrance at the top of the Hall of Countenance, and there are two entrances to the Arcanaeum. These are on either side of the tower that reaches above the two halls. Most of the sleeping quarters contain barrels and sacks of food. There are also many bottles of alto wine, wine, and Nord mead. All wardrobes found within the hall contain various items of fine clothes. There are many pieces of fine crockery including goblets, plates, bowls, etc. throughout the hall. Items in cubicles that are assigned to specific people are generally owned and taking them will be considered stealing.

Upon entering the hall there are moth-eaten college banners on either side wall and a focal point that is releasing magical energy upwards in the center of the lower level of the tower. Proceeding clockwise around the floor the first cubicle is Tolfdir's sleeping quarters. His cubicle contains an owned single bed coming out from the wall with small bedside tables on either side of the bed. To the left is a tall wardrobe and a couple of chairs, while to the right on the floor are two drums and a narrow wooden table against the wall with some red and green apples on top. Above the table are two wall shelves holding three empty soul gems—one common, one lesser and one petty—as well as two deathbell flowers, a bowl of ectoplasm, a bowl of fire salts, a bowl of frost salts, an orange dartwing, two swamp fungal pods, and a bowl of troll fat.

The final cubicle which is to the right when entering is the sleeping quarters that are given to you when you first enter the College and begin the questline by gaining official access. It contains an unowned single bed coming out from the wall with small wardrobes on either side. The one on the left has a copy of Azura and the Box atop. To the left of the bed is a chair and small round table between several barrels and a small table by the doorway with a bowl of void salts, a bowl of vampire dust and two ice wraith teeth on top. To the right are two tall wardrobes with a small wardrobe between. On the smaller wardrobe there is an empty common soul gem and three skulls on top. By the doorway is another small table with three blue mountain flowers and a bowl of ectoplasm on top, and on the floor at the rear of the room is a basket containing five bottles of Nord mead.

There is a hole in the center of the room with the magical energies from below rising into the ceiling. Around this is a low wall to prevent accidental falls. The first cubicle is Enthir's sleeping quarters and where he spends most of his time. There is an owned single bed coming out from the wall with small bedside tables on either side and an unlocked chest at the foot of the bed. On the left of the bed are a set of shelves holding three common books, a copy of Souls, Black and White, ten bottles of Nord mead, six bottles of alto wine, and a bottle of wine (see bugs). To the left of the shelves is an unlocked chest with a lute leaning against it. To the right of the bed are two chairs with a tall wardrobe between them.

The next cubicle is a dining room with a long wooden table and bench filled with foodstuffs with a narrow table to the right. Next is Nirya's cubicle with an owned single bed coming out of the wall with small wardrobes on either side. To the left is a set of shelves, two chairs, and a drum on a barrel. The next cubicle is unused and contains a large vat, several barrels, and some crates. It is full of cobwebs. The next cubicle is Mirabelle Ervine's sleeping quarters with a single bed coming out from the wall with several straw bales to the left and a couple of crates and a barrel to the right.

The next cubicle has a wooden bench along the rear wall with a large round wooden table and chairs to the left and a narrow table and more chairs to the right. On top of the first table are two common books. The final cubicle is Arniel Gane's sleeping quarters with an owned single bed coming out from the wall with small wardrobes on either side. There is a large coin purse on the one to the left. Also to the left of the bed are two sets of shelves holding samples of imp stool, white cap, and Namira's Rot fungus, a basket containing four spider eggs, three nightshade flowers, three ice wraith teeth, a sample of hagraven feathers, a bowl of glow dust, a giant's toe, a bowl of frost salts, two deathbell flowers and a bowl of bone meal (see bugs). To the right of the bed are two tall wardrobes with a small wardrobe between them. On top of the small wardrobe is a filled common soul gem, an empty petty soul gem, and a troll skull.