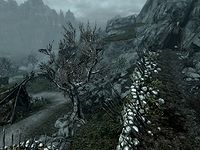 Druadach Redoubt is a small encampment and cave occupied by Forsworn, located southwest of Mor Khazgur and north of the Shrine to Peryite. It has an exterior camp and one interior zone: Druadach Redoubt Cave.

*Present if they survive No One Escapes Cidhna Mine quest. In addition to these NPC's there are; 2 leveled melee Forsworn (one will be located at the farm and the other in the middle tier); 2 leveled archer Forsworn (one will be located in the middle tier and the other on the highest tier); 1 Forsworn Briarheart (located on the highest tier).

Along the path leading to the camp is a tall tree with a bear trap on the ground under it and a set of bone chimes hanging from it. The exterior of the redoubt is home to a small camp of Forsworn. There are only two leveled Forsworn; one melee and one archer located in the camp outside for you to kill before moving into the interior of the redoubt. There is an iron ore vein located upstream from the camp on the southern shore and three growths of blisterwort fungus to the sides of the entrance to the cave. 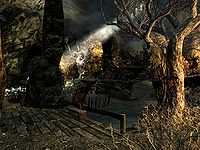 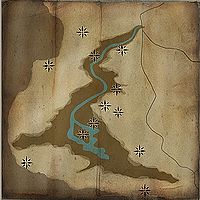 Upon entering there is a short tunnel with an iron ore vein a few steps ahead to your left, before emerging into the main cave, you will then have to cross a small stream via a bridge. The cave consists of three ascending ledge, with two paths leading up to the rear of the cave. On your left as your cross the bridge is a row of weapon racks holding a Forsworn bow and axe. Alternatively you can try and sneak around the bridge and onto the other side. After you have crossed the bridge there is a small farm consisting of fourteen potato plants, a goat, a grain mill and a wood chopping block, that is tended to by a single Forsworn. There is a table near the mill with a bucket containing potatoes and a Forsworn sword on top. To the right of the wood chopping block is a rack holding the salmon, a rabbit and pheasant. There are two quicksilver ore veins along the northern wall beside these potatoes.

If you follow the ramp from the farm you will encounter the largest tier of the redoubt, despite being the largest tier, there is only two Forsworn for you to dispatch, one of these may be sleeping in the tent on the left, above the farm, while the other patrols the other end of the level. To the right of this tent is a grindstone under a oil lantern and bone chimes hanging from a tree. There is a level-locked chest just to the right of the eastern-most wooden ramp that leads up to the top tier. It is partially hidden by plant matter and is set back under the top tier, below a Juniper tree. On either side of the other path up to the middle tier are large tents, both of which have hay piles inside, one contains a deer hide and random healing potion, while the other contains a cow hide. Against the southwest wall, just before the southern ramp up to the highest tier is a tanning rack.

Climbing the southern ramp from the middle tier, you will have reached the highest tier of the redoubt, and this is where the 'boss' lurks often working at a forge, which is located near the northern ramp up to the top level. There are three steel ingots resting on the forge. (If you have completed No One Escapes Cidhna Mine it will be as easy as sneak killing them, as all the NPCs in the redoubt will be friendly if you sided with Madanach). On your right is another large tent containing a hay pile, with a sleeping leveled Forsworn. Beyond this there is a dead bandit to the right of a cage amongst the plant matter. In the center of this level is a campfire with a cooking spit hanging over it. Next to the fire is a long wooden table holding a selection of cooked meats.

Against the rear wall of the cave is a second tanning rack. To the left of this is another tent containing an unlocked chest (where any items you are sent here to recover will be located). Towards the front of this tier, against a large pillar of rock, west of the campfire is a set of shelves holding a copy of the Light Armor skill book The Rear Guard, a random magicka potion, a deer hide and some more meats. To the right of the shelves on the ground is a wolf pelt. Against the northeast wall of the cave is a long wooden table with a map of The Reach showing the locations of all Forsworn camps, a random enchanted dagger (see bugs), four loose gold coins, two lockpicks and a deer hide on top. Activating the map plots the locations of any undiscovered Forsworn camps, after which the map disappears from the table.