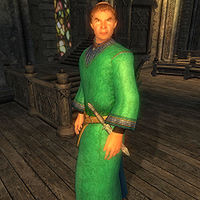 Arctus in the Sacellum Arden-Sul 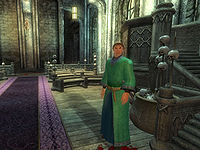 Arctus at ease in the newly-decorated Sacellum

Arctus, a Nord priest, is the High Priest of Dementia. He lives in the Sacellum Arden-Sul in New Sheoth. During the Flame of Agnon quest, he will try to persuade you to light the flame for Dementia. He will also inform you on how to perform the Ritual of Dementia.

His devotion for Arden-Sul is so ardent that he spends literally every instant of his life walking around the Sacellum, in apparent peace, without ever eating or sleeping. His rather monotonous schedule is broken frequently during the related quests. Once you have lit the Cold Flame of Agnon, he will move behind one of the pulpits of the Sacellum and immediately initiate conversation with you once you enter. If you choose to light the Dementia flame, he will proudly escort you to the bracer and set it ablaze. When the Ritual of Accession commences, he will travel to the left pulpit, only to come back down and talk to you if you killed Syl and placed her heart on the altar. Once you become Duke or Duchess of Dementia, he will conveniently move out of the way of Thadon and Sheogorath when they give their speeches. If you lit the flame of Mania, once The Helpless Army quest is active, every time you enter the Sacellum he will start preaching from the pulpit, hoping to convert you to Dementia.

He wears upper-class attire consisting of an aqua silk robe and a pair of green velvet shoes. He is armed with a silver dagger. In addition, he relies on a set of leveled priest spells. He also possesses a lesser power that allows him to evoke a Dark Seducer.

Arctus will greet you with "Arctus, High Priest of Dementia. I'm here to guide those that wish to serve themselves. What did you require?" If you ask him about his beloved Arden-Sul he will praise his name: "Blasphemy! Never utter the name of the Dark Deceiver lightly! Though his body is beyond Oblivion, his soul encircles us... always watching, waiting to pounce with lethal aplomb. He is the bringer of pain and pleasure; the blade that cuts through our sins like a scythe through wheat. Only a true Demented can appreciate what it means to render his name."

If you tell him you are considering Mania he will try to dissuade you: "Oh no. You don't want to do that. Don't believe their lies. They are no true friends. Don't you see it? How they whisper behind your back? No, light the Torch for Dementia and you'll see how we treat our friends. Dementia takes care of its own. Few know that the Hero who lights the Torch for Dementia is granted the Ring of Intrigue, a boon for those who would gain access to hidden knowledge. Surely you will do what is right, won't you?" If you ask for time to think he will urge still: "Yes, let your mind worry at the problem. Let fear and dismay over making the wrong choice sink their talons deep into your brain..." If you finally decide to light the flame for Dementia he will be overwhelmed: "You are truly Demented, as I always suspected. Release yourself to your secret fears and desires. Let them rule you, as they must in the end! Now, light the Great Torch as a beacon for those who fear and those who inspire fear."

If you then light the flame of Dementia he will be ecstatic: "The Great Torch flares with the light of Dementia! All of Crucible will be celebrating tonight! Here. Take this. The reward you have earned. Quickly now. It's best if no one knows you wear this." and "You chose well. The Great Torch shines with the luster of Dementia and the glory of Sheogorath." If on the contrary you went for Mania, he will refuse to converse with you: "I'm disappointed in your choice. You'll find Mania to be a fickle friend."

During the Ritual of Accession quest Arctus can provide some background info: "Seldom is the subject ever bro-... wait a moment, did you want to hear the history of the Ritual?" If you ask him to get to the point he will continue unabated: "Very well. Spoken like a true son of the Demented. To become ruler of Dementia, the current leader's heart must be cut out and brought to the Altar of Arden-Sul in the Sacellum. Once this is done, I can pronounce the heart-bearer a Duke or Duchess. Then, all that is required is the blessing of our lord, Sheogorath." If you asked for the details he will happily fill you in: "As it happened so many years ago, my lord Arden-Sul suspected a traitor in his midst. Not wishing to find himself on the wrong end of a blade, he gathered his flock here in the Sacellum. By poisoning the sacramental wine, Arden-Sul was able to suppress any such conspiracy in one fell swoop." If you ask him to expand he will continue: "Yes. He then removed their hearts from their bodies and used his ancient scrying technique known as visceromancy to read their lifeblood. When Arden-Sul couldn't divine the traitor's true nature in their hearts, he became distraught and took his own life in the same way. From that day on, the Ritual of Accession for the throne of Dementia was set."

If you manage to slay Syl, he will joyfully proclaim you as her successor: "Once again has the Ritual of Accession come full circle! The heart of Syl has been consumed by Arden-Sul's will, and the Demented welcome you with open arms. I now declare you to be Duke/Duchess of Dementia of the Shivering Isles! May your wrath and anger be your guide." If on the other hand you became Duke/Duchess of Mania he will be bitterly disappointed: "You've made your choice and forsaken the name Arden-Sul. Please, leave me be."

At different stages in the Main Quest, Arctus will share different rumors with other NPCs: