After speaking to Arctus, you will find out that Dementia's ritual is far less refined than Mania's. Replacing Syl entails a simple and brutal assassination; to find out more about her routine, the High Priest recommends you start by questioning her courtiers.

Converse with the Court

Ask Syl's maid, Anya Herrick, about her Duchess and she will inform you that Syl is staying out of sight because she fears Sheogorath wants her replaced. Raise her disposition to at least 60 and she will offer to assist you by distracting the guards.

Speak with Kithlan and raise his disposition to 60. He'll confess he's also getting tired of Syl, and will give you the key to her wing of the Palace.

The Dark Seducer guards in the Private Gardens will now attack you on sight. Fight them off and enter the Duchess's quarters to find Syl, lying dead on the bed. Unfortunately, Kithlan will appear and inform you that it is not really Syl, but a mere double. He will then elaborate: Syl has escaped through a network of hidden tunnels beneath the palace.

...When the Threat is Real 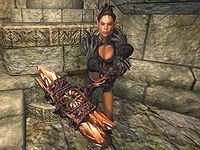 Activate the bust of Sheogorath in the garden and enter Xirethard. The whole dungeon is designed to ambush the unwary assassin, so be aware at all times. In particular, you will be faced with a series of hunger statue traps in a grid pattern - the easiest way to negotiate these is to stick to the walls and look around before crossing an open space. After fighting or sneaking your way past the various guards you should arrive in a room with two Royal Dark Seducers standing around a wrecked table. Deal with them how you like and search for a switch on a pillar to the left of the north wall (if from the entrance, look directly left). This will reveal a secret passageway, continue to follow this path until you locate a large room with two Royal Dark Seducers and Syl, now clad in Mazken armor and wielding the mighty Nerveshatter. If you wish to avoid close combat with all three, it is possible to snipe at Syl just after opening the door. Once the Duchess is dead, retrieve her heart and backtrack to the palace.

Return to the Sacellum Arden-Sul and activate the altar. Once you have witnessed a bright flash of light, speak to Arctus and Sheogorath, who will appear in the pews to the rear of the Sacellum, to complete your ascension to the throne of Dementia. A short while afterwards, Thadon will enter and berate Sheogorath for the death of Syl. He will angrily reveal that the Fringe is under attack and express his intention to defect to the Forces of Order. After he leaves, Sheogorath will present you with the Ring of Lordship and the power to summon a Dark Seducer for 60 seconds a day, along with a dire new task.