You may hear from some residents in Anvil about an all-female gang of thieves who pick only on married men. They lure them in with their charms and then rob them. You will be pointed in the direction of Gogan, who lives in Gogan's House at the west end of Anvil.

At his house, you will find both Gogan and his wife, Maelona, who tell you that Gogan was tricked by the thieves and that they stole his wife's ring, which was a family heirloom. They will both ask you to help them, and suggest that you start at The Flowing Bowl, which is where Gogan was approached.

Head off to The Flowing Bowl down by the docks and wait. Two women (Signy Home-Wrecker and Faustina Cartia) enter The Flowing Bowl and approach you. If you are male, they seductively invite you to have a "night of fun" at their farmhouse just outside of town; if you are female, they invite you to join their gang. You are told to meet them after 11pm at Gweden Farm, which is now marked on your map.

Note: due to a bug, the player may become locked in the farmhouse with no means of escaping. Thus it is advisable to save before entering the farmhouse if playing on a console.

When you arrive at the farm Faustina will be inside. Do not immediately attack her; you must first talk to her. She asks you either to take off all your clothes and weapons if you're male or, if you're female, to confirm that you want to join their gang. Refuse to do so and tell her that you know what she's up to.

The Jig Is Up 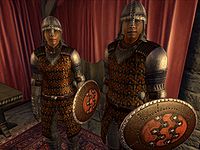 After you say this, Signy and Tsarrina appear. Normally all three attack you, and force you to kill them. If you have previously increased Signy's or Faustina's Disposition toward you, however, they may not attack. In this case, you still need to kill them to complete the quest, but initiating combat will cause their deaths to be counted as murder. To avoid this, simply talk to them, which should lower their disposition toward you.

After you kill your attackers, Gogan and Maelona come in through the door, dressed in City Watch armor. They explain to you that they work for the City Watch and that they needed a stranger like you to help foil the thieves. They thank you and reward you with a level-dependent amount of gold (see chart below).

Before leaving the farmhouse, be sure to search and loot the sirens' corpses (after you leave the main room of the farmhouse, their corpses will all disappear). On Faustina's corpse you will find the Witsplinter, a leveled enchanted dagger, and the Gweden Basement Key. The key provides access to the basement, where you will find a stash of all the things they stole from the married men in town. It is not possible to return these items to their original owners, as there are no additional related dialogue options, so you are free to keep the items for your own use.

After Gogan and Maelona have left the farmhouse the front door is permanently locked, so be sure to take everything you want with you before leaving.