The ingredient Spiddal Stick comes from the plant "Spiddal Stick," which is a plant native to the planes of Oblivion. There are actually 2 varieties of this plant, both of which yield the same ingredient. When you approach Spiddal Stick plants they release a yellowish cloud which has a Drain Speed effect.

Normally Spiddal Stick plants are not found in Tamriel, however they take root outside of several Oblivion Gates. Even after those gates are closed (and even after the Main Quest is completed) the Spiddal Stick plants remain present and can be harvested. Alchemists may want to ensure that these Oblivion Gates are among those that open, by traveling through these cells at a few stages during the Main Quest.

There are no guaranteed samples of Spiddal Stick, but it can be found randomly in the inventories of alchemy vendors.

Spiddal Stick plants are found in every plane of Oblivion, including both Boethia's and Peryite's realms (but they are not found in Paradise). The planes with the highest concentrations are:

The Oblivion Gates in Tamriel where Spiddal Stick will take root are:

People who have downloaded the Wizard's Tower official plug-in will also be able to find 10 domesticated plants in the Alchemy Garden - These will not release poison on approaching them. 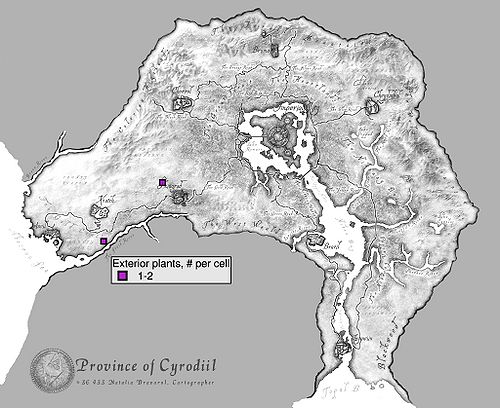 Locations of Spiddal Stick plants in Tamriel. These plants are only present if the associated Oblivion Gate has opened.
Obtida de "https://pt.uesp.net/w/index.php?title=Oblivion:Spiddal_Stick&oldid=12044"