As noted in Find the Heir, Martin will not escape with you unless everyone else in the Chapel of Akatosh can leave safely, but the guard will not let anyone out until Savlian Matius gives the order. Savlian is too busy killing the Daedra outside the Oblivion Gate to aid in your quest, so your only choice is to offer to help him close it. Tell him you want to help, get ready for battle, and activate the gate. You do not need to have delivered the amulet before doing this quest. However, other Oblivion Gates won't open until you do so.

After entering the gate, you will find yourself on an island in the Deadlands, Mehrunes Dagon's Plane of Oblivion. Ahead of you can be seen two Daedra (the exact type depends on your level) running at you on a bridge over a lake of lava. Two towers and a larger tower between them can be seen in the distance. To the left, Ilend Vonius is fighting some of the monsters. At higher levels, there is a fair chance that the Daedra will kill Ilend if you are not fast enough to save him. If he isn't dead already, help him kill the Daedra. After they're dead, Ilend will tell you he was sent in with a few other soldiers to try and close the Oblivion Gate. One survivor from the assault was taken as a prisoner to the large tower.

At this point, you can ask Ilend for help or you can try to close the Oblivion Gate by yourself. He will attack with his sword and shield and heal himself relatively quickly. At your command, Ilend can follow you or wait behind, which is useful for tactical raids. However, make sure Ilend doesn't fall into the lava, especially if you knock a creature into it. If you want more companions, you can attack Savlian and his men, and they will follow you into Oblivion, fighting you and hostile creatures. If you yield, however, they will leave.

After entering the gate, you will find yourself in the Kvatch Oblivion World. Your destination is the largest visible tower, which can be recognized by the yellow light visible at the top. The direct route - across the bridge immediately in front of the Oblivion Gate - is blocked by two large war gates. If you have high acrobatics you can simply jump around the gates. If not, you will instead have to head west and head up the western side of the island that makes up this world. Along the way, watch out for landslides (Ilend is particularly prone to getting swept away by the landslides into the lava) and the usual assortment of Daedra and Dremora.

Once you reach the Blood Feast, (the Sigil Keep), venture inside. Inside you will find a few Daedra so take them out. Your goal is to reach the top of the tower, taking out any enemies you find on the way. For the first section of climbing, enter the Rending Halls, which lead you to the first balcony inside the Blood Feast. From there you can enter the Corridors of Dark Salvation, but two of the doors out of this room are locked and require a key. So take the third door, which leads you outside and across a narrow bridge to one of the smaller towers, Reapers Sprawl. 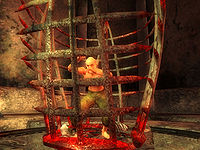 At the top of Reapers Sprawl you will find Menien Goneld locked in a cage and guarded by a Dremora Sigil Keeper, who will initiate a conversation with you. He will say, "You should not be here, mortal. Your blood is forfeit, your flesh is mine!" At that point he will attack you. Kill the Sigil Keeper to get his key. Menien will provide you with a bit more information about where you are going, but will insist that you continue on and do not try to rescue him. However, this is a moot point, as you cannot rescue Menien.

Back in the main tower, you can now open the locked doors. If you're in a rush to get the job done, take the northern door from the Corridors of Dark Salvation, watch out for traps, and exit at the first door you come to. You'll find yourself on an even higher-level balcony in the Blood Feast. The Runed Portal on this balcony is a teleporter that takes you up to the top balcony.

From the top balcony you gain access to the final room, the Sigillum Sanguis, which is the room that contains the Sigil Stone. Climb up the stairs, killing any enemies you find, and at the very top you will see a glowing ball balancing on the red stream of lava you saw earlier. This is the sigil stone that holds open the gate to Oblivion. Taking it will transport you to the outside of the Oblivion Gate you entered from, along with Ilend Vonius if he went with you, and will destroy the Oblivion Gate in the process.

The previous section described the most direct route through the Kvatch Oblivion World. However, exploring a bit more thoroughly can yield some additional treasure.

At the southwest corner of the island is a smaller tower called the Blood Well. At the top of that tower you will find the switch that opens the main war gate (and you will also find a blood fountain). Oddly enough, the switch does not open the war gate immediately adjacent to the Blood Well, but only the war gates back near the Oblivion Gate, for example if you need to resupply or if you need to take back some of the loot you have gathered so far.

At the north side of the island is the entrance to the Sump of Misery, which is a cave with a good amount of loot. The cave itself contains four fleshy pods. It also leads to the Desolate Well, which is the otherwise inaccessible tower at the north end of the island. The top of the Desolate Well will reward you with two of the Punished (loot containers), and a blood fountain.

Inside the main tower, the Corridors of Dark Salvation provide access to a couple more small bonus areas. The southern locked door leads to a small balcony containing two of the Punished. Following the passage from the northern locked door all the way to the end leads to another narrow bridge that crosses to the final tower, Meat Harbor. At the bottom of that tower you will find two more of the Punished. There are plenty of Oblivion plants found in this area. You can harvest at least 121 Bloodgrass, 35 Harrada, and 37 Spiddal Sticks. 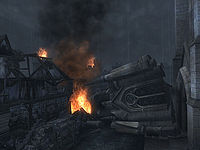 The ruins that await when you enter the city of Kvatch

Now that you're back at Kvatch, with a destroyed Oblivion Gate behind you, return to Savlian and report your success. He'll say that he knew you could do it, and suggest that now would be a good time to mount a counter-attack on the remaining Daedra. When you're ready, follow him and the other soldiers into the city and help him fight off the monsters near the chapel. If you told Ilend to leave, he will join his fellow guardsmen in the counterattack. Once the Daedra are all dead, he'll walk to the chapel to make sure the civilians inside are alright. At this point, you can either escort Martin to Weynon Priory or help Savlian reclaim Kvatch in an optional quest.