This is one of seven random oblivion worlds; in addition, the Oblivion gate in front of Anvil always connects to this world.

When you first emerge from the gate, you can see the main tower ahead of you on top of a hill. In order to ascend the hill, you will need to go through a series of caves. If you follow the path in front of you around to the east side of the hill, roughly at 4 o'clock in the map you will find an entrance called Nether Tunnels, which leads into a set of random oblivion caves. These get you a third of the way up the hill; follow the path around the hill to The Red Gnash Channels, which will get you another third of the way up. From there, just follow the path as it zigzags the rest of the way up to the tower. It is also possible, if you have a high Acrobatics skill, to simply jump across the rocks and ascend the hill without using the caves.

When you exit any of the cave systems you have a 50% chance of encountering a Daedra or a Dremora.

The main tower in this world is one of the five random towers.

There are two peripheral towers, Reapers Sprawl and Meat Harbor on islands next to the main hill. Both contain minor loot.

Several Fleshy Pods can be found here: one is to the right on the path leading away from the Oblivion Gate; two more are along the main road around the island; yet another one is at the southern tip of the main island, across from the Meat Harbor tower; one more is next to a Magicka Essence on a side path at the southwestern corner of the island; and the last two are on the final path winding up to the tower. Besides that, there are two Blood Fountains here: one is next to the Reaper's Sprawl tower, and another one is to the west of the Oblivion Gate, though not easily accessible from there. 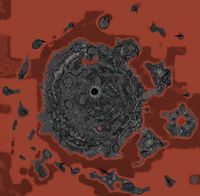