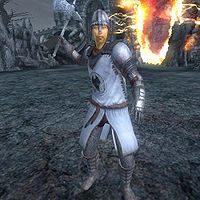 Merandil is an Altmer soldier serving in the Kvatch Guard. He is one of the few survivors of the destruction of Kvatch by Mehrunes Dagon and his forces. He regrouped to the gates with other surviving soldiers: Jesan Rilian, Savlian Matius, Ilend Vonius, Menien Goneld and several others. While the last two and a small squad went into the Oblivion Gate itself, Merandil was left with two others to defend what remains of Kvatch's population. Later on, he will help you and Savlian Matius liberate the castle.

Merandil wears chainmail greaves, gauntlets and boots with a Kvatch cuirass and a guard helmet. To fight, he has a silver war axe and a steel bow with a single arrow. He also has a small amount of gold. He knows a fortify marksman on self spell, which has a magnitude of 90 points.

When you arrive at the barricade near the Kvatch gate, Merandil will, along with Jesan Rilian and Savlian Matius, be quite busy defending the barricade from the Daedra constantly spawning from the open Oblivion Gate. Every time the Daedra have been slain, the three guards will seek shelter behind the barricade, only to rush forward again when the next batch appears from the gate. If you speak to Merandil here, he will provide a bit of info on the man you are supposed to locate, Savlian Matius: "Savlian's not really the captain, you know. We're just following him because he's the highest ranking officer left alive." On the situation and destruction of Kvatch, he will say: "The whole city is burned right down to the ground. There's no point in even being here. We ought to just get away to someplace safe." After you have spoken to the "Captain", a seemingly scared Merandil will say: "If we make it through this alive, I'll be amazed."

After you have shut down the Gate, Merandil and the other two guards will stay put behind the barricade until you approach Savlian. He will then participate in the battle against the Daedra outside the Chapel of Akatosh. After a brief visit inside the Chapel, Merandil will head back outside and wander around the slaughtered Daedra, in a state of disbelief: "We... we did it? And I'm still in one piece! I mean, of course we did it. I never doubted us for a second." As soon as you talk to Savlian inside the Chapel, starting the Battle for Castle Kvatch quest, Merandil will stay outside but will say: "Just follow the Captain's orders." When you do, Merandil will run head-first into central Kvatch and fight all the Daedra he encounters; should he survive the long battle, he will remain in the Great Hall of Castle Kvatch for the rest of the game.