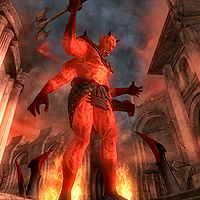 Mehrunes Dagon is the Daedric Prince of Destruction, Change, Revolution, Energy, and Ambition. He is associated with natural dangers like fire, earthquakes, and floods. He is an especially important deity in Morrowind, where he represents its near-inhospitable terrain as one of the Four Corners of the House of Troubles. In most cultures, though, Dagon is merely a god of bloodshed and betrayal. Dagon's plane of Oblivion is known as the Deadlands. As the name suggests, they are barren wastelands, consisting of blackened isles in a sea of lava. The Dremora, Clannfear and Scamps are among his servants.

In Oblivion, Mehrunes Dagon is the Daedric Prince behind the entire Oblivion Crisis. For most of the main questline Dagon remains behind the scenes; his followers (such as Mankar Camoran and the Mythic Dawn) are more directly responsible for most of the events. However, Dagon does finally appear in person during the quest Light the Dragonfires, where he is the final obstacle preventing Martin Septim from being crowned. Dagon must be avoided (as he cannot be killed) in order to enter the Temple of the One.