Poisoned Apples are a specialty item used by the Dark Brotherhood to assassinate people. These items will kill any non-essential character who eats them, no matter what (even if the target is immune to poison). Once eaten, the Poisoned Apple applies a script effect that adds the Ability "Damage Health 10 points" to the victim. Since the damage being done is now a character's Ability, there is no way to resist, cure, or dispel it after it's activated.

You will not incur any bounty for people killed using poisoned apples. Poisoned apples cannot be duplicated in the Arch Mage's Enchanted Chest.

As an alchemy ingredient, poisoned apples are nearly (though not entirely) useless. They can be combined with another script effect ingredient or master-level alchemists can make a single ingredient potion using poisoned apples. However, the resulting concoction is a potion, not a poison. The only possible way to use the potion is to drink it yourself and thus kill yourself. However, if you save and reload the game before drinking the potion, the potion's scripted effect will no longer take effect when it is consumed.

However, poisoned apple potions do have one asset to them: They can be renamed. Since the potions are weightless, they can be reverse-pickpocketed into a person's inventory. If you rename the potion with two A's at the beginning and stick it in their inventory, they may drink the potion first, effectively removing the requirement to loot their dining area and inventory of all other food items.

16 guaranteed samples can be found (these locations will respawn, since Poisoned Apples are food) in the following locations:

A poisoned apple will kill any non-essential NPC who eats it. The only trick to using the apples is having your target eat the apple and ensuring that no other NPC picks up the apple in the meantime. Ways to use the poisoned apples:

Now, finally, you may wait. Depending on the target, it may take as long as one day. If you search the now dead target's body, you will find the apple is gone due to the simple fact that they ate it.

A small number of NPCs are effectively immune to poisoned apples because they carry a self-replenishing supply of food, which they will eat in preference to the poisoned apple. In addition, some NPCs (such as Sibylla Draconis) never eat, so can never be killed with this method. 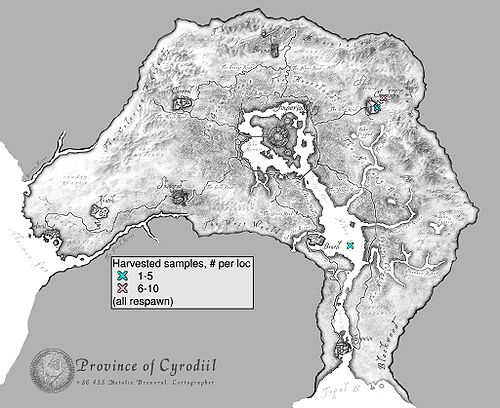