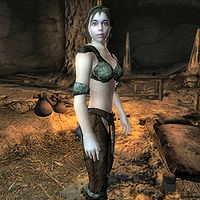 Sibylla Draconis is a hostile Imperial barbarian who lives in Muck Valley Cavern. According to her mother Perennia, "Sibby", as she calls her, has always loved animals and moved into the cave a couple of years ago. Today, Sibylla spends all of her time pacing around the cave surrounded by her beloved animals. She's so absorbed, in fact, that she doesn't even find the time to eat or sleep.

She wears a huntsman's outfit of pants, vest and moccasins and wields a steel mace. Even though she has no use for them, she also carries a few gold coins.

Her isolation from the rest of Imperial society hasn't hidden her from the gaze of the Dark Brotherhood, who have received a contract to wipe out the entire Draconis bloodline - Sibylla included.