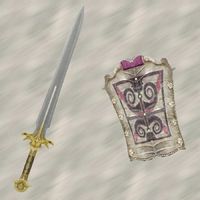 These are all the new items that appear as part of the Fighter's Stronghold official plug-in.

For information on how to find the correct values for the "xx" characters in these IDs, see formids.

The sword is almost identical in design to the Shadowrend sword from Shivering Isles.

The levels for this item are somewhat unusual, because the leveled list uses your character's level as input at low levels, but at higher levels it uses Lord Kain's level (PC-5) as input. This table converts the list, so that the table in all cases shows the version you will receive as a function of your character's level (at the time when you obtain the sword).

* This is the level 25+ sword in the leveled list. However, it is Lord Kain's level (not your level) that would have to be at 25 for the sword to appear. Since Lord Kain's maximum level is 20, this sword will never be obtained in game.

The sword bestows a lesser power called Dragon Breath when wielded. The effects depend on the level of the sword carried. Although classified as lesser powers, the magicka cost in each case is identical to the base magicka cost of the equivalent spell made at the Spell Making altar. Therefore the only advantages of this lesser power are the lack of a Destruction skill requirement and that you can cast it even if Silenced. The effects are as follows:

Both these shields share the same appearance as Lord Kelvyn's Bulwark, above.

These weapons are the ones used by Shagrol gro-Uzug when he spars against you and can only be obtained by picking them from his pocket. Typically, only two items will be present in his inventory because he will have the other equipped. The third can be obtained by asking him to spar with you using one of the other two weapons, and then picking his pocket again.

In addition, the wine cellar upgrade adds the following new potions which can be brewed when Talan is provided with certain items.