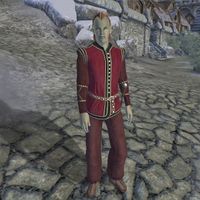 Alval Uvani is an extremely arrogant Dunmer battlemage, strong in the arts of Destruction magic. He travels around Cyrodiil each week, earning his keep as a "trader".

Uvani's attire comprises a burgundy linen shirt, burgundy linens, and a pair of thick cowhide shoes. He carries his house key and a decent amount of gold, and he wields a leveled dagger which will bear a harmful enchantment at higher levels. Alval has an arsenal of three leveled spells, one from the Mysticism school, one from the Restoration school, and one from the Destruction school. Additionally, his Black Hand ability gives him a decent resistance to both magical and normal attacks.

When you approach Alval, he will make it clear that he has no interest in talking to you and will threaten you by saying, "You get any closer and I'll turn your bones to ash. Back off." If you attempt to engage him in conversation, he will refuse to speak to you: "I have no time for your pathetic attempts at small talk. Now walk away, before I get... nasty." If you successfully paralyze him, he will express his frustrations when you approach him: "Can't... Can't move... Body frozen... Must have been... the damn... Mead..." If you then enter conversation with him while he is paralyzed, he will blame you for paralyzing him: "No! You filthy guttersnipe! You won't get away with this! By Sithis, if I could only move my arms, I'd rip that smile right off your face!" This largely hints that he is involved in the Dark Brotherhood.

Keep in mind that there may be some variation based on the time it takes for him to get to the different cities.