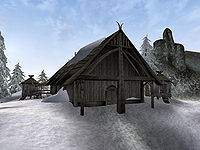 Thirsk is a Mead Hall created by Hrothmund the Red and some fellow Skaal early in the third century of the Third Era[1] (though some residents claim the founding dates back into the late Second Era[2]). It is located south of Skaal Village in the Felsaad Coast region, on the banks of Lake Fjalding. The easiest way to reach it from Fort Frostmoth is to head east along the coast until you reach Iggnir River, then follow that to Lake Fjalding.

By tradition, any who would seek to be chieftain of Thirsk must first perform a great task as a warrior and present a battle trophy to the Mead Hall. The record of Thirsk's chieftains covers roughly 102 years, beginning when Hrothmund the Red beheaded a challenger to the present time, when Bujold the Intrepid killed the beast of Ilfark. The record can be seen as a reflection of hard life Solstheim offers: many chieftains managed to hold the position for merely a handful of years, and common causes of death included getting eaten by wolves, infected by rabies, and getting slain by the next chieftain.[3]

Much of Thirsk's past revolves around a vicious creature known as the Udyrfrykte. The Udyrfrykte had attacked and killed many residents when Thirsk was first founded, but had been sealed in its lair by a sorcerer named Eldrid Ice-Light, who used a wall of ice to trap it inside.[1] A hundred years later, however, in 3E 427, this ice shield melted, and the Udyrfrykte attacked and killed many more people in Thirsk, including the Nerevarine's predecessor Skjoldr Wolf-Runner.[3] A few years later, another chieftain would be killed the Udyrfrykte Matron.[4] Circa 4E 201, residents had become more enamored of mead than of battle, and they were driven out of the Mead Hall by a clan of Rieklings.[5]

The following is taken from the records of the Mead Hall, with some exceptions as noted: