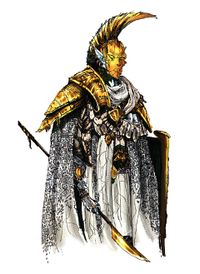 Concept art of an Indoril

After being founded during the early part of the First Era, House Indoril was one of the strongest Houses with vast political power. Many Indoril nobles held influential positions due to the House's close ties to the Tribunal, whom Indoril claimed kinship with.[2] It was the House of Chimer hero Lord Indoril Nerevar, and Indoril Brindisi Dorom, the Duke-Prince of Mournhold, who ruled that city during its destruction by Mehrunes Dagon in 1E 2920.[3]

The House's period of influence and power came to an abrupt halt at the end of the Second Era. After the Armistice was signed between Lord Vivec and Tiber Septim in 2E 896, House Indoril, along with House Dres, swore they would resist Imperial rule to the death; many leading figures chose to commit suicide rather than accept the Empire. The Lord High Councilor of the Grand Council, himself an Indoril, rejected the treaty, and refused to step down. He was then assassinated, and replaced by a noble from House Hlaalu. Emboldened by the success of their new Imperial allies, House Hlaalu embraced the opportunity to settle some old scores with House Indoril, and a number of local councils and land holdings changed hands in the bloody feuds that followed. These events saw House Indoril rapidly lose power, and it was left severely weakened during the period of transition to Imperial rule.[4]

The remaining members of House Indoril retreated into positions in the Tribunal Temple hierarchy. The predominately Indoril militant order, the Ordinators, protected Vivec, Mournhold, and other Temple holdings. Its main resources being tied up in Guard duty and the maintenance of defenses against Dagoth Ur for the majority of the Third Era, the House, although not without influence, was far from its former glory.[5] In 3E 433, citizens of Cyrodiil spoke of House Indoril being in ruins as a result of machinations of the new king, Hlaalu Helseth, and his House Hlaalu and House Dres allies.[6]

Following the disappearance of the Tribunes at the end of the Third Era, the Tribunal Temple collapsed. House Indoril, whose power and influence was entwined with the Temple from the beginning, suffered greatly as a result. The Temple hierarchy was taken over by the former Dissident Priests and renamed the New Temple. The House and the priesthood of the New Temple are now considered one and the same, although the majority of the priesthood still hail from the old House Indoril. The political power of the Indoril has thus passed entirely into the hands of the Temple.[7]