Creatures on Solstheim are highly adapted to the bitter conditions; many of them are immune to cold. They are generally stronger than the wildlife in Morrowind, higher in level and have more sophisticated abilities and tactics. See also undead for the more unnatural creatures encountered on the island.

"Bears are but one of the sacred creatures the All-Maker has blessed us with. They embody the warrior's strength, and some of the Skaal can even summon them to fight by their sides." — A Skaal

Description: This dark red furred bear is the weakest to be found on Solstheim, but is nevertheless an impressive creature, much larger than the average adventurer, especially when standing up on its rear feet.
Found: All over Solstheim in the woods as well as in some ice caves.

"Lots of them around this island. Some of them are pretty nasty, even diseased. Doesn't pay to mess with them, though their pelts can be valuable, I hear." — A guard at Fort Frostmoth

Description: Of similar size to the grizzly bear, this beast is more resistant against the surrounding nature than its cousin, and known to carry diseases.
Found: All over Solstheim.

"They're big, and deadly! Their claws and teeth can freeze the flesh of an enemy." — A drunkard at the mead-hall in Thirsk.

Description: This magnificent beast can only be found in a few locations on Solstheim. It is perfectly adapted to its cold habitat and must be feared for its brutal attacks.
Found: Five locations in the Hirstaang Forest (map):

"I have heard them called that. We do not know what they really are. Perhaps an evil spirit, perhaps a great beast. Whatever they are, they are dangerous. Their claws and tusks rend armor and tear flesh. They will attack alone or in packs. Take care when they are near." — A Skaal

Description: A strange huge creature that lives underground. Little is known about it.
Found: Rarely found in some ice caves.

* This ability is turned off if the Grahl is receiving Fire Damage.

"Another of the All-Maker's wondrous creations. These creatures provide a great deal for our people. They are strong swimmers and fierce fighters, on land and in the sea." — A Skaal

Description: A peaceful sea animal that is typical for the seaside of Solstheim. However, if not left alone it is said to chase an aggressor even on land.
Found: Common at the northern seaside, in the rivers and the lakes.

"Foul creatures. Some call them the Falmer, claim they are related to the other elves. This I do not know, but they are vile. Some are intelligent enough to speak, but they speak only nonsense." — A Skaal

** While the Riekling Raider may appear to be two creatures, a Riekling mounted on a Tusked Bristleback, they are for all practical purposes one creature. The rider can never be separated from his mount, even in death.

"The tree spirits of this island. When the All-Maker breathed life into the creatures of the land, his Breath blew through the trees as well. Some of these trees kept a part of this life, and these are the spriggans you see today." — A Skaal

Description: These spirits of the icy forest are like the local trees. Strong and resistant. Protecting the woods against intruders they fight anyone coming near and are feared greatly because they cannot be killed easily.
Found: Common in the greener southern region of Solstheim.

"The Tusked Bristleback is a mystery to us. It is a natural being, created by the All-Maker, but it is a cruel and vicious animal. The Rieklings use them as mounts, and have bred the creatures to be even more warlike and dangerous." — A Skaal

Description: The wild boar can be found in the coldest regions of Solstheim. Aggressive and mean, resistant against most influences and a fierce fighter too. Often comes in packs and should be avoided.
Found: Common in the colder northern and northwestern region of Solstheim.

"Wolves are one of the most blessed of the All-Maker's creations. They are fast and agile, and they are careful and clever hunters." — A Skaal

Description: Next to the plague wolf the most common animal on Solstheim and they often travel in packs.
Found: Common all over Solstheim apart from the coldest northern region.

"They're all over this island. Some travel in packs, which makes them especially dangerous. I've heard some carry disease, as well." — A guard at Fort Frostmoth

Description: This natural hunter likes to attack in packs, surrounding the prey. These creatures can spread diseases and should be treated carefully.
Found: Common all over Solstheim apart from the coldest northern region.

* It's likely the plague wolf was given this spell by mistake instead of the Resist Paralysis ability, since the wolf does not have enough magicka for this or even the ability to cast spells.

"Funny you should mention it. I'd swear I saw one the other day. But maybe it was just my eyes playing tricks on me. All this snow all the time, and you're bound to start thinking you're seeing things in it." — A Miner at Raven Rock

Description: This rare creature is the toughest of its kind and often sought after because of its fur.
Found: Five locations in and near the Moesring Mountains (map):

"%PCName, did you hear about the raven at the Altar of Thrond? It's enormous! They're saying it's a sign that the Witches have come to Solstheim..." — Odd Rumor de Helena

Description: This strangely large raven appears at a certain time on Solstheim.
Found: At the Altar of Thrond.

"You are now irrevocably involved in the Bloodmoon Prophecy and it's a fight for survival." — Korst Wind-Eye

Description: These creatures represent the Daedric Prince Hircine during his hunt on the mortal plane.
Found: Mortrag Glacier, Huntsman's Hall

*These two versions of Hircine are seen only during cutscenes, and cannot be attacked. 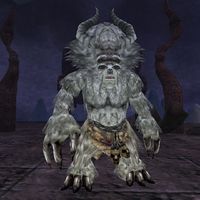 "I have met the master of that place, though I hope never to meet him again." — Captain Falx Carius

Description: This frost giant is probably the largest creature on Solstheim, and unfortunately on the same mission as yourself.
Found: During Hircine's hunt.

*This ability is turned off if Karstaag is receiving Fire Damage.

"The Udyrfrykte? That's a children's tale, meant to scare the wee ones to get them in bed. Don't believe everything you hear." — Reinhardt Red-Spear

Description: A dreadful monster that dwells in an ice cave and has a taste for human flesh.
Found: Lair of the Udyrfrykte.

These new creatures use models found without the expansion, but with different IDs.