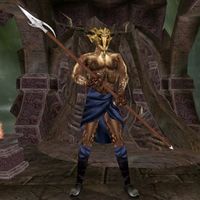 Hircine in his first appearance

Note: These two versions of Hircine only appear in cutscenes, and you are unable to move while they are visible, so they cannot attack or be attacked. For information about the aspects of Hircine that you actually fight at the end, see:

Hircine is a Daedric Prince whose sphere is the Hunt, the Sport of Daedra, the Great Game, the Chase, and is known as the Huntsman and the Father of Manbeasts. Hircine created the various therianthropic diseases which transform mortals into beasts, and is therefore the guardian of were-creatures. They reflect his sphere admirably, hunting at night and being hunted by day. Hircine's existence appears to have been discovered later than other Daedric Princes, as he doesn't appear in the most ancient records and summonings of him were rare or non-existent. Hircine is a sportsman who enjoys giving his prey a chance for victory, however small. He is typically portrayed with a great spear and either the head or skull of a deer. Hircine's enemy is Ebonarm and his summoning day is 5th of Mid Year.