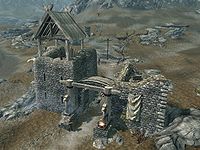 Whitewatch Tower is a small tower just northeast of Whiterun occupied by the guards of whichever faction controls the city itself.

To find Whitewatch Tower on your map, look just northeast of Dragonsreach. If you're having trouble, try looking east of Halted Stream Camp and west of Shimmermist Cave, as it is between these two locations.

Whitewatch Tower is an open-air, frontier lookout post. As expected, wildflowers grow freely, including blue, purple and red mountain flowers, and lavender, at what would have been considered the entrance of the ruined keep. A stone quarryHF is on the southside of the tower, behind a stone wall outcropping. In the courtyard of the tower more lavender is growing. There are some meager provisions for the guards just to the left of the entrance arch. A novice-locked chest among the crates holds more substantial treasure. A weapons rack is on the south end of the courtyard, under a tree. It holds two Imperial swords and a leveled sword, or else an iron war axe, matching battleaxe and leveled mace should the Stormcloaks take over the hold. The wooden ramps lead up to the watch tower and nothing of interest. However, jumping onto the ledge on the west side of the tower, behind the guard’s chair, and crossing over the archway takes you to the ruin of the west tower. Buried in the rubble is an apprentice-locked chest.