Travel to Sheogorath's Palace, and following the instruction of Dyus by attempting to imbue the Staff of Sheogorath by activating the Font of Madness. At this point in time, nothing will happen. Speak with Haskill, who will inform you that Font has been tainted by Order crystals. You must enter the Fountainhead and cleanse the Pools of Madness.

Enter the Fountainhead, located within the tree behind Sheogorath's throne. You will immediately notice that it is populated by both tamed and untamed gnarls. The few tamed Gnarls are not hostile, and will unlock the Order-sealed doors throughout the Fountainhead. All other Gnarls are hostile and possess a white aura.

Progress further into the Fountainhead and you will encounter one of numerous chrysalides scattered around the cave; activating them will spawn a tamed Gnarl. As you delve deeper still, you will encounter priests of Order who are in the process of tainting the smaller pools. Kill the priests and loot the shards of order found on their corpses - these will allow you to open doors and hollowed stumps that have been sealed by order crystals. Fight your way through until you reach the Pools of Madness.

Cleanse the Pools of Madness 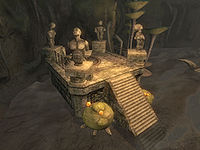 The Pool of Mania

The quest will differ at this point, depending on which Duke or Duchess you usurped during the Ritual of Accession quest. You will find either Thadon or Syl, attired in the uniform of a priest of Order and escorted by several other priests, in their respective pools; while the other will only be guarded by a few priests. Kill all the enemies, thus cleansing the pools.

Return to Sheogorath's Palace and activate the Font of Madness to complete the quest.