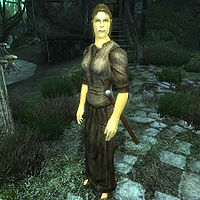 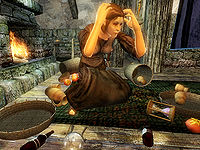 "My house. So orderly. And now this!"

Cindanwe is an Altmer savant running the major water root pod operation in Fellmoor. In an attempt to mask her own insanity, she has manipulated the two Khajiiti, Ranarr-Jo and Kishashi, into believing she has mind reading abilities in order to keep them working the farming operation. She is overly pedantic, to the point of requiring everything in her home to be arranged immaculately and during the related quest, you will help free the two Khajiiti from slavery.

True to her own philosophy, the bossy Altmer lives her life without much sleep but with plenty of hard work. She sleeps only two hours each night, starting at 4am and always begins the day with a two-hour breakfast in her painstakingly orderly house. At 8am, she wanders around a bit before finally venturing outside at 9am, immediately looking for her two farmhands, ready to shovel them down the mudhole amidst all the Root Pods, forcing them to work. If any of them tries to get away, she will actively seek them out and follow them back into the water. After a long day trying to keep the Khajiiti under control, Cindanwe reenters her house at 9pm and eats a three-hour dinner. She spends half the night, until her bedtime, wandering around the house, making sure everything is in its place. After the quest, if you chose to mess up interior decoration of her house, Cindanwe will cancel all of her appointments and simply wander around her trashed house in a state of disbelief, at times crouching down, expressing great frustration about the mess.

Not particularly wealthy, Cindanwe wears a set of common middle-class attire from Cyrodiil, a coarse linen shirt with matching linens and huntsman moccasins. She wields an iron shortword and carries a few pieces of gold. Before and after the quest, depending on how you chose to solve it, she will also carry her Notebook, which proves that she is utterly insane, and reveals that she has no mind reading or controlling abilities, but that she enslaved the Khajiiti simply so they won't realize just how maddeningly paranoid and afraid she is.

Cindanwe's house contains a large number of ingredients. Each of the five barrels around the house holds four samples of black tar, four water root pod pits, four samples of tobacco, and four tomatoes, as does the cupboard in the east corner with six bottles of mead on top of it. The two crates under the stairs contain dishes. Three more samples of black tar sit on a table on the northwest wall, along with grummite eggs and another bottle of mead. Six more tomatoes sit on the dining table along with two smoked baliwog legs and a loaf of bread. Another two tomatoes are held in a basket nearby. Three baskets in the loft bedroom hold nine more pod pits. The chest of drawers between them contains only a cloth bolt, an inkwell, and a quill, as does the one downstairs. None of the containers respawn. 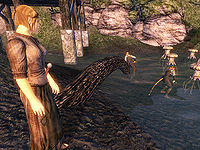 Cindanwe's work methods and her Pod Pit operation are well-known across the Isles: "Cindanwe runs a tight ship in Fellmoor.", "The workers in Fellmoor aren't too happy with Cindanwe." and "I've heard Cindanwe works the other residents day and night. They're none too happy." Meanwhile, in Split, the demented Atrabhi will mischievously tell you: "The field hands love Cindanwe. She keeps them motivated and extremely happy."

When you finally confront Cindanwe for the first time, it becomes apparent that she has her hands full trying to control the two Khajiiti: "Be quick please, I have a farm to run. It isn't going to run itself, now is it?" On Fellmoor, she will complain about the two lazy Khajiitt and mention psychotic hunter Relan: "We are a farming community. Nothing more. Nothing less. That is, when I can get these layabouts to actually put in a day's work. Relan is the only one around here worth a damn. And that's only because he loves to kill his pests." Talking to Relan will net you the following unsettling greeting: "Relan. It is I who kills. It is I who hunts. It is I who keeps the fields and farms clean for Cindanwe." On the topic of Cindanwe he will add: "Cindanwe think she tough lady. Not as mean as Relan. She okay. She let Relan kill things that need to be dead." When speaking to one of the “layabouts”, the overly paranoid Ranarr-Jo, it becomes apparent that something is seriously wrong in Fellmoor: "Our situation is desperate, she controls our minds... but wait, I've said too much." The other enslaved Khajiit and former "queen" of the Isles, Kishashi, concurs and describes Cindanwe like this: "Thinks she's in charge, treats us as slaves. Do I look like a slave?" After receiving Khishashi's spoon, Ranarr-Jo will add further information: "Watch yourself while you're here. Cindanwe is out for us. She cares for nothing but work, and she keeps us as slaves!" After you hand him the spoon, he will reveal: "Cindanwe is always trying to hurt my sweet Kishashi. Wouldn't want the slave-driver to get her hands on this spoon." He will then task you: "Cindanwe is pure evil. She must be stopped at all costs. However, she knows everything about all of us, keeps notes about everything. EVERYTHING! She knows so much about us that she can read our minds! But she doesn't know about you yet. So, you must do it. Get rid of her. Get rid of Cindanwe!" He even have a few suggestions about how to do it: "Well there's the obvious way. But don't let us see you do it. Sheogorath has a thousand eyes and ears. Or, you could make her life so miserable that she leaves us alone. She needs everything "just so." So, sneak into her house and wreck the place! And "confiscate" her notebook. She carries it wherever she goes, recording all our secret thoughts. I need that book! My thoughts belong to me!"

Talking to Cindanwe at this point will net you a few observations on the “layabouts”; on Khishasi she will say: "She'll actually get something done. The problem with her is getting her motivated. You have to play mind games, with that one." On Ranarr-Jo, she will comment: "Doesn't get as much work done as he should. He's always turning things over to look under them, searching for who-knows-what. Not a bad worker -- once he gets his mind on something -- but usually he's doing something unproductive." If her disposition towards you is below 70 and you ask her about the Notebook, she will say: "How do you know about that? It's private. I don't trust you enough to talk about it." With a raised disposition, she will respond: "It's my private journal. I write in it everyday. Sometimes more than once. It's something I have to do. It keeps my thoughts from unraveling." When you ask if you can look through it, she will let you borrow the Notebook with the words: "Well... I've never shown it to anyone else before, but I feel I can trust you. Here. Look it over, but bring it right back. Okay?" However, if you stole her book from her, she will only say: "That's a private thing. Besides, someone stole it. Relan needs to step up security around here."

At this point, Ranarr-Jo will not accept the Notebook, and will send you on your way to Cindanwe’s house, asking you to wreck the place; after doing so, if you manage to catch Cindanwe on her way back to the house, she will give you an entirely different greeting: "You'd better have a good reason for interrupting me. Keeping these miscreants working this mudhole is no simple task. If you must know, I am Cindanwe, foreperson. And don't let that liar Kishashi or that psycho Ranarr-Jo tell you any different." When you report your deeds to Ranarr-Jo, he will say: "Ha ha! That should keep her occupied. She'll spend months putting everything back in place! Thank you for your help. Here, take this. I was using it to ward off Cindanwe's evil mind control magic. I don't need it now." When you hand him the Notebook, he will say: "Excellent! Let me see that.... A-ha! It's right here. Written in her own hand. She is planning to murder us all. I knew it!" Cindanwe will now spend all of her time inside her house, crouching amidst all the chaos and disarray, and will comment: "Can't you see I'm busy? My house. So orderly. And now this! Where do I even begin?"

At different stages in the Main Quest, Cindanwe will share different rumors with you and other NPCs: