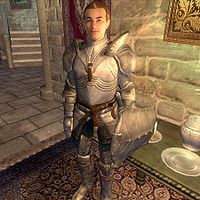 Viranus Donton is an Imperial knight and member of the Chorrol Fighters Guild. His mother, Vilena, is the Master of the guild. He had an older brother, Vitellus, who was recently killed in the line of duty. He is not as confident as his brother was, and you will be asked to offer him a boost in morale during The Master's Son quest.

He is always equipped with a complete set of steel armor except for the helmet, and wields a silver longsword. He carries his house key and a small amount of gold. He also knows a leveled set of knight spells. During his stay in Forsaken Mine he also carries his journal, which describes his many frustrations towards his overprotective mother and hints at a homosexual relationship with his friend Eduard. Incidentally, the diary will also be the beginning of the end of the Blackwood Company.

After the loss of Vitellus, Vilena understandably wants to keep her only remaining son alive and never allows him to participate in any contracts for the Fighters Guild. As a result, Viranus lives a completely isolated existence in his mother's house. He sleeps on the second floor every night between 2am and 8am. After waking up, he wanders around the ground floor until he sits down and enjoys a lonely two-hour lunch at noon. After four additional hours of doing absolutely nothing, he sits down once again at 6pm and takes his dinner for two hours. The evening is spent in a similar manner and when Vilena gets home at midnight, she goes straight to bed, leaving her only son to himself until his bedtime at 2am. He only gets out of the house at 10am on Sundas when he will spend two hours wandering around inside the Chapel of Stendarr.

Meanwhile, in the streets of Chorrol, the concerned townsfolk are busy talking about the overprotected son of the guildmaster: "With Vitellus dead, Vilena thinks only about protecting Viranus. That's a sure way to ruin the boy.", "Viranus needs to stop hiding behind his mother's skirts if he expects to run this outfit someday.", "Viranus is a good kid. It's his mom who's getting in the way.", and "Vilena Donton hasn't been very aggressive as head of the Fighters Guild. Maybe her son Viranus will show a bit more spunk." Others will mention second-in-command, Modryn Oreyn: "Oreyn is trying to get Viranus out in the field, but Vilena keeps interfering." The gossip tells the truth; Modryn Orreyn is tired of the rising competition from the Blackwood Company and the many rumors about Vilena's lack of leadership, and decides to send both you and Viranus into the field, thus starting the quest The Master's Son: "I've got another job for you, slightly off the record. You'll be going on a mission with Viranus Donton. Yes -- the Guildmaster's son. You're to accompany him, and make sure he succeeds. He needs some time in the field, to get his confidence up, or he'll never become a good warrior. Vilena coddles the boy too much. Doesn't want him in the line of fire. Suppose it's no surprise after Vitellus." He will also say: "His mother's been holding him back, protecting him. You'll go to Nonwyll Cavern with him. Galtus Previa was lost there, and you're to find him. And not a word of this to the Guildmaster! Go find him. He'll be in the Donton house, most likely. And bring him back in one piece!" 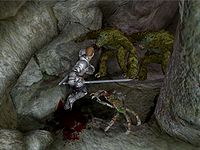 When you locate Viranus in the house he will say: "Greetings, guildmate. What can I do for you?" If you ask him about his deceased brother, he will respond: "Yes, my older brother. He was lost on a mission. Vitellus died valiantly, as we all knew he would. He was the best of us. I'm sure our mother is very proud of him." On the topic of Galtus Previa, he will be quite surprised: "A mission? Well... of course! I'm sure we can do this. You say this came from Oreyn himself? Well. Perhaps I should speak with Mother first...." You have two options available at this point; tell him that you are in a hurry or that Vilena shouldn't know. The first option will net you: "Oh. I'm prepared, of course. I'm sure there's no need to speak to Mother at all. Let's go." If you choose the second option, he will object but will come to his senses: "But, she's the Guildmaster. Certainly, she'd.... No. You're right. If the order came from Oreyn, it's a valid one. We should be off immediately. I'm sorry. It's just that I haven't been given many contracts since my brother... since the accident. Let's go." He will finish with: "He must be in Nonwyll somewhere. Let's get there quickly." Once inside Nonwyll Cavern, Viranus will change this greeting to: "We must find Galtus Previa. He must be here somewhere." He will then follow you all the way through the cave, heroically fighting the many enemies along the way. Inside Nonwyll Chamber of the Titans, a scared Viranus will look at Galtus' dead body and will say: "We should get back to Oreyn and report what we have found." He will then add: "Dead. I can't believe it. So much death." He will then follow you back to Chorrol, and even enter the Guild Hall to bring Modryn the sad news. Once the quest is completed, Viranus will exit the hall right away and return to his monotonous life in his mother's house. After the events at Nonwyll Cavern, the ever-gossiping townsfolk will start to say: "Nonwyll Cavern is a good start. But the kid has to go out on his own, or he'll never learn the hard lessons.", "Viranus wasn't alone at Nonwyll Cavern, you know. Would he have done that well without help?" and "Viranus is just a kid. But he did pretty well at Nonwyll Cavern, I guess."

When you start the quest Trolls of Forsaken Mine a concerned Modryn Oreyn will ask you to locate Viranus: "I've got another job for you. It's a sensitive one. I need you to find Viranus Donton. I sent him on a mission to Forsaken Mine. He and some others were supposed to clear the place of trolls. Haven't heard back from them in days. I want you to go check it out. I don't need to tell you how sensitive a matter this is." A sensitive matter indeed, as Modryn once again sent Viranus into the field behind Vilena Donton's back; eventually, the whole thing explodes when you find Viranus dead in the depths of Forsaken Mine, along with several other Fighters Guild members and, mysteriously, a dead member of the Blackwood Company. Due to the bloodstains leading to his body, Viranus was attacked and wounded in the second large room of Forsaken Mine Lost Passages, then dragged himself through the tunnels to the southernmost room where he died next to his friend Eduard. His diary reveals several truths about the insanity of the Blackwood Company, even the fact that they were responsible for his death. When you return to Modryn with the sad news, he will be shocked and hint at things to come: "Dead? Dead! What happened? A journal? Let me see that... Blackwood Company! Bastards! Rank amateurs! I don't like to think how Vilena is going to take this news. He was my responsibility. I'll be the one to tell her."