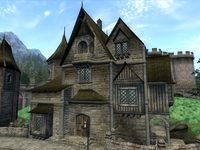 Vilena Donton's House is located in the north of Chorrol, overlooking the Great Oak, between Rimalus Bruiant's House and Fire and Steel.

As soon as you enter, there is a collection of silverware placed across the three small tables in front of the exit. If you head to the right, you'll find yourself in the dining room and notice the tapestries hung on the wall in several places. On the dining table, you will find that all the manchester is silverware, apart from one ceramic bowl. The ingredients found spread across the various plates placed on the table are 7 pears, 1 clouded funnel cap, 2 cheese wheels, 2 apples and three strawberries. You can also find a bottle of Tamika's West Weald Wine, Surilie Brothers Vintage 415, and 399. Also there is a shelving unit where you can find more silver manchester as well as being placed ontop of the cupboard and another table found on your way towards the exit. If you head straight down the hall, you will find a living area to the left. There are several silver glasses spread out across the room on several tables. There is also a bookshelf which contains several books and also holds two silver urns and two crystal balls. Before you head up to the stairway however, you will find underneath the stairs 3 barrels and a grain sack containing food ingredients, along with a crate with a wine rack on top containing 6 bottles of Surilie Brothers Wine and there is also some more silverware and a bottle of Tamika's found here. There is also another exit to the back of the house, with multiple sacks, a cupboard and a locked chest located nearby. If you head up the first three flights of stairs, there is a locked door leading to the second floor of the house. Also to the right, there is a small seating area that consists of a couple of chairs and a smaller table. If you continue to go up three more flights of stairs, you will come to another locked door which leads to the third floor of the house.

On the second floor, there is a unlocked clutter chest directly down the hall. Both the left and the right rooms are bedrooms. The first bedroom on the left contains a single bed, a bookshelf (with assorted books, an hourglass, ceramic bowl and also a silver dagger), drawers and also a table located at the end of the bed which has one pewter pot on top of it. The second bedroom on the right however, has a single bed near the window, along with a set of drawers with the book Varieties of Daedra, a small dining area that consists of a small dining table and chair along with silverware and two grapes. There is also a smaller table by the archway which has two more grapes and also a silver vase.

On the third floor, as soon as you walk in, there is a small table area located on the left along with a silver urn and bowl. If you continue to the central area of the bedroom, you will find a double-bed on the left, along with a locked chest located in a corner on the left side, and also a dresser next to the bed which has a clutter chest and a Nirnroot plant. Straight ahead, there is a study area which consists of a desk, a small table with more silverware and a bench (despite its appearance being a stool). On the desk you will find two quills, an inkwell, and also the books Report: Disaster at Ionith and The Posting of the Hunt. On the right-hand side of the room there is another exit which leads to the balcony outside overlooking the Great Oak. There is also a dining area with metal manchester, a cheese wedge, a bread loaf, and a bottle of cheap wine. Nearby, there is also a shelving unit which holds the books The Legendary Sancre Tor and The Wolf Queen, v 8, and a piece of folded cloth. There is also another set of drawers with assorted silverware on top and gold. There is also rolls of cloth found here (one on top of the drawers, the other on the ground).