The ingredient Venison is primarily found as food, and can also be collected from dead Deer.

158 guaranteed samples can be found (these locations will respawn, since venison is food), in the locations marked with red crosses on the map. The places with the highest numbers of samples are:

It can also be found randomly in food containers.

All varieties of Deer produce Venison when they are killed. Deer are only found Outdoors, where they can randomly appear at all levels in any type of terrain except for along roads in Snowy Mountains. These deer will randomly respawn.

There are also 27 wilderness locations where Deer are guaranteed to appear (red squares). At 14 of these locations, there is also an Imperial Legion Forester who is likely to be chasing the deer. 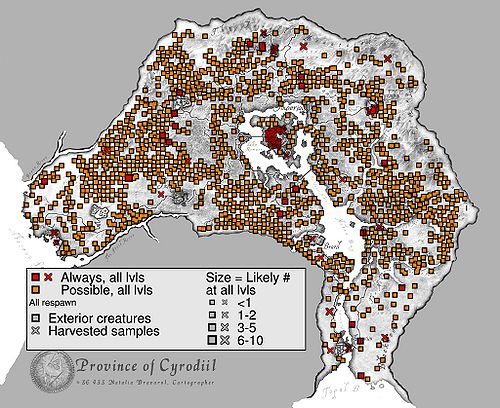