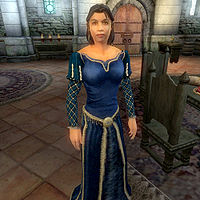 Marana Rian in her house

Marana Rian is an Imperial agent and the master trainer in Sneak. Marana believes, somewhat arrogantly, that the Temple District is the most desirable address in the Imperial City simply because she lives there. She will offer to train you only if you manage to steal a coin from her pocket.

Marana is a bit of a night owl, sleeping from 6am to midday in her luxurious house in the Temple District. She will immediately exit her house and take the northwest road up to The All-Saints Inn for a two-hour breakfast before returning home at 2pm. At 6pm she will go outside to meet up with Ancus Afranius, and at 10pm she will travel to the Arboretum for four hours of reflection. She will then take the tunnel to the Waterfront and spend six hours skulking around this rough part of the city, only heading home when the sun begins to rise. The only exception to this schedule is during Light the Dragonfires, when the Temple District is attacked by Mehrunes Dagon and she and the rest of the inhabitants of the Imperial City are confined to their homes under martial law. During her normal routine, she will offer training to you as long as she is not eating or sleeping.

She wears a blue velvet outfit and a pair of blue suede shoes. She carries her house key and a large amount of gold.

Speaking to Marana for the first time will have her greet you by telling you her name, and a bit about her lifestyle: "Marana Rian. I am very fond of nice things. How fortunate that I can afford them." Asking her about the Imperial City will have her make further claims about the grandeur of her life: "The Temple District is by far the most desirable address in the city. Why? Because I live here, of course. Don't you agree?"

Asking Marana Rian for Sneak training will have her reveal her secret skill set, and a promise to train you if you prove yourself to be a worthy student: "Training? From me? A few too many loose lips, it seems. It's not something I want to be public knowledge, if you understand my meaning. Very well. Simple task for you. I just dropped a favorite coin of mine into my pocket. If you can steal it from me, I'll train you." Asking her for Sneak training again before you steal her coin will have her once again deny you training until you succeed in the task she gave you: "You don't have my coin, so you don't get any training. I haven't changed my mind." Once you successfully steal the coin from her she will agree to train you: "Well, there it is. Not the best job I've seen, but you did it. All right, I'll help you hone your technique."