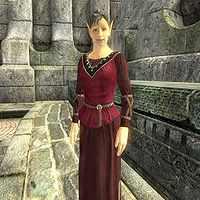 Thamriel is a Bosmer commoner who lives in the Imperial City's Talos Plaza District with her caretaker Elragail.

Thamriel sleeps in her house from 10pm until 6am and then spends four hours wandering around her ground floor. At 10am, she heads to The Foaming Flask for breakfast and spends two hours there before heading home again. At 2pm, she walks to the Market District and walks around the southern corner for three hours. On Morndas, Middas and Fredas she then heads over to Green Emperor Way and wanders there until 9pm before returning home; on other days she goes straight home from the Market District. Additionally, Sundas sees her spend 8am to noon praying in the Temple of the One. Thamriel was also intended to play a role in the unfinished "Imperial Couriers" quest; at midday on the 3rd of each month, as long as Maenlorn is still alive, she will head to the Black Horse Courier and stay there for a brief moment before she resumes her usual schedule.

On the 20th of each month, when the clock strikes midnight, Thamriel starts her long journey towards Skingrad. She crosses the Talos Bridge and heads south on the Red Ring Road, before finally hitting the Gold Road for the rest of the trip. She arrives in Skingrad the next morning and checks in at the Two Sisters Lodge just before noon. Here, she will socialize with the other regulars without ever eating nor sleeping. At midnight on the 22nd, she returns to the Imperial City and her usual routines.

Thamriel appears to be a little unhinged. When first encountered, she will announce: "Thamriel of Tamriel. What are all those strange creatures in the garden? Where are all the white birds?", and her friend Elragail will tell you: "I look after Thamriel. He's [sic] a little strange. 'Touched by the Gods', they say." Other residents of the Imperial City speculate on her strangeness, and will say: "Thamriel says she hears voices. All the men and women who lived and died here for thousands of years... maybe they left ghosts behind."

She wears a middle-class outfit of burgundy linen pants and shirt with pigskin shoes. She also carries a few gold coins and her house key.