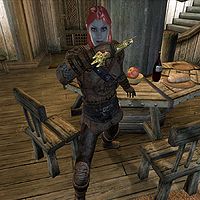 Minx is a Dunmer thief and one of only four members of the Blackwater Brigands, a recently formed gang of thieves based in Bravil. Along with her accomplices, Lynch, Wrath and Selene, Minx has hijacked the Bloated Float, apparently in search of a legendary gold statuette known as "The Golden Galleon", which she believes is hidden somewhere on the ship.

After you have taken care of Lynch, Minx will be the next thief you encounter during your unexpected voyage. She will be in the dining area of the Tavern Deck, constantly patrolling without eating or sleeping.

She wields a leveled longsword and wears leather gauntlets, greaves, boots and the uniquely designed leather cuirass, branded with the emblem of the Blackwater Brigands. She carries the key to the top deck and a small amount of gold.

When you enter the dining area, Minx will immediately approach you with the words: "Ho there! Where do you think you’re going! Selene's not going to like this one bit... I wasn't to be disturbed!"

Once Minx is dead, you will be able to progress to the top deck.