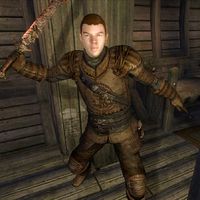 Lynch is a Nord thief and one of only four members of the Blackwater Brigands, a recently formed gang of thieves based in Bravil. Along with his accomplices, Minx, Wrath and Selene, Lynch has hijacked the Bloated Float, apparently in search of a legendary gold statuette known as "The Golden Galleon", which he believes is hidden somewhere on the ship.

After you have awakened and found that the ship has somehow been brought to sea, you will find Lynch just outside the cabin door, constantly patrolling the lower deck, tirelessly carrying out his duties without eating or sleeping.

He wields a leveled longsword and wears leather gauntlets, greaves, boots and the uniquely designed leather cuirass, branded with the emblem of the Blackwater Brigands. He carries a useful note with his instructions, the key to the ship's storage room and a small amount of gold.

When you try to leave your room, Lynch will immediately approach you with the words: "Hey! Who in Oblivion are you? You don't look like one of the Blackwater Brigands!"

Once Lynch is dead, you can begin finding a way to return to the Imperial City.