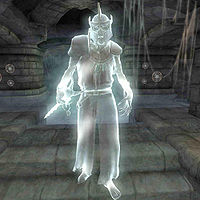 Lorgren Benirus was the grandfather of Velwyn Benirus and the original owner of Benirus Manor in Anvil. He lies in a hidden tomb in the manor's basement; however, the purchase of the manor reveals that he is not actually dead. In life, he was a mage who, after obsessing with a necromantic tome, experimented with necromancy and turned himself into a lich. To extend his life, he had dug up bodies from Anvil Chapel's graveyard and used their souls. He also created the Benirus Manor ghosts to guard the house. Lorgren's journal note shows his wrathful feelings toward the Anvil citizens of a century past, who disdained his use of the dark arts. The Mages Guild, worried about his activities, set up an almost successful raid of his manor. Led by Carahil, the raid stopped Lorgen's plans to destroy Anvil, but Lorgren's body disappeared amidst the chaos.

When you activate the altar in the tomb, Lorgren will speak and make a request: "I am Lorgren Benirus, and I desire the chance to atone for my sins. The things I've done to the people of Anvil; the horrible, unspeakable acts I've committed demand repentance. Carahil was justified in his [sic] actions. Slaying me was the only way to stop the madness. I have accepted that fate. Now, so I may make my final peace with the Nine, please rejoin my hand to my body. Only then, when I am complete, will this eternal nightmare end." When you grant him his wish, he will finally awake with the words: "It never fails to amuse me how easy mortal man is to manipulate. You've assisted me in completing the very thing Carahil and his cabal sought to prevent all those years ago... my ascension to immortality. Last time I clashed with mortals, I underestimated their power. I shall not repeat that mistake twice. I live... again! Hahahaha!"

After this speech, Lorgren will appear as a lich and attack, forcing you to kill him.