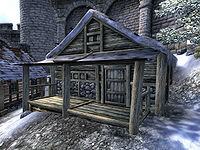 It is the residence of Jearl and Saveri Faram and contains two zones; Jearl's House and Jearl's Basement. 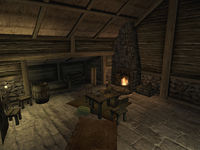 The ground floor of her house contains nothing of particular interest, except for a chest with a random piece of either iron or steel equipment, located next to the fireplace. There is also a trap door next to the table in the middle of the room that leads to the basement. 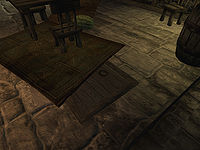 The hidden trap door to Jearl's Basement. "I wonder where this goes..."

The basement, however, shows a couple of vital clues to her secret identity; The skill books Mythic Dawn Commentaries 1 and 2, and, if you have started the quest, the document Jearl's Orders, a major piece of evidence. There is also a door that leads to the Bruma Caverns.