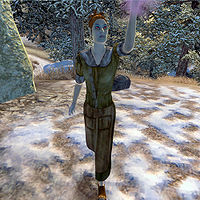 Saveri Faram is a Dunmer living in Jearl's house in Bruma. Like Jearl, she is a Mythic Dawn spy who's been observing Cloud Ruler Temple. You will have to deal with them both during the Spies mission of the Main Quest. She only appears in the game once the quest is initiated and, like all the other agents at this point, will attack you on sight.

She wakes up at 10am and spends the next four hours wandering around the house before joining Jearl for lunch at 2pm. At 4pm, she enters the basement and heads out through the tunnel into the Bruma Caverns to spend two more hours there.

After that, she will exit the caverns and make her way through the wilderness up to the Hestra Rune Stone southeast of the Temple, where Jearl is already stationed. If you approach Saveri unseen at any point, she will return to the caverns before attempting to resume her regular schedule, possibly leading to repeated trips to and from the rune stone if you are following her. After a long night, she finally goes to bed back in Jearl's house at 6am.

She wears a pair of green felt linens, clogs and a green wool shirt. She carries the key to Jearl's basement and a small amount of gold. She knows the standard Mythic Dawn Armor and Mace spell.