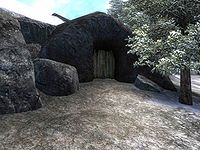 Bruma Caverns is a small cave west of Bruma containing animals (quest-related). It contains only one zone, Bruma Caverns. 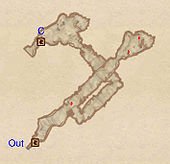 Being a very small cave with only nuisance animals and lacking in terms of loot or valuables, it is fairly unremarkable. It does provide a secret entrance into Bruma through Jearl's house; which can be useful if you are trying to evade the guards. The door to Jearl's basement, however, is locked with a leveled lock, so either a spell or lockpicks are required. A key does exist, but is not available until the initiation of the Spies quest, at which it can be obtained from Jearl or her companion, Saveri Faram.