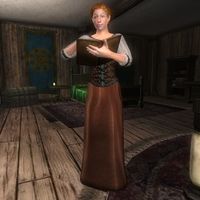 Jeanne Frasoric, a Breton sorceress, is the head of the Bruma Mages Guild. Her position is more likely due to her social skills than any actual talent in magic as she's quite mediocre as a spellcaster. For example, she can't even figure out a basic spell like Detect Life in order to find a guild member, who's been hiding from her with a Chameleon spell, and instead enlists you to track him down during the Bruma Recommendation quest.

She does however make an effort to improve her magical abilities and will spend much of the day either reading The Book of the Daedra or training. Between 7am and 8am she will either read in her office or walk around the ground floor of the building. From 8am until 8pm she will spend more time reading behind the reception desk, occasionally breaking off to try to cast a Summon Scamp spell. After a hard day of studying she eats dinner in the basement dining room for two hours. She finally retires to her private quarters to sleep at 10pm. Like most of the Bruma chapter, she is killed when the hall is attacked during the Plot Revealed quest.

She wears middle-class attire consisting of a quilted doublet, tan linens and a pair of doeskin shoes. She also carries a Mages Guild Key, her book and a leveled amount of gold. She doesn't carry any weapons, relying instead on two practice spells (summon scamp and a Paralyze one), a leveled Summon Minor Daedra spell and a leveled set of standard conjurer spells.

Even in her own room, she only possesses her bed and her desk, which has a very easy lock.

If you approach her before having joined the Guild, she will say: "Hello there! Are you here to join the Mages Guild? The guild is always accepting new members. You seem capable enough; are you sure you want to join?" If you decline she will be disappointed: "I see. Let me know if you change your mind I'm sure I could be helpful." If instead you accept, she will promote you and explain what will grant you access to the Arcane University: "Very good! You are now an Associate of the Mages Guild. What a wonderful opportunity for you! Now, please keep in mind that you'll need recommendations from every local guild hall in Cyrodiil before you may enter the Arcane University. I dare say my opinion might carry more weight than others, if you take my meaning. Still, all are necessary to proceed. Good luck to you!"

After you have joined the guild, she will greet you with open arms: "Why, hello there! You must be new. Oh, it's so nice to see new faces in the guild! If you ever need anything, just let me know. I have friends in all sorts of high places, you know, so I can get things done that others can't. And if I can do anything for you, I'd be happy to! Someday, maybe you could return the favor!" She acts indifferent when asked about Bruma: "You know what it's like. Make lots of friends, and look busy. Same as anywhere." Like most Mages Guild Members, she will comment on the Arcane University when you ask her about the Guild: "Guild members who have access to the University can craft their own spells, not to mention chat with the most important people in the guild." On the university itself she has the following observations; "Why, all the important people in the guild are there! Arch-Mage Traven lives there, in the tower. It's a fabulous place - you really should see it some day. I've been there many times myself. The Imperial City just wouldn't be the same without it. Maybe, some day, if you know the right people, you might get a chance to see it."

When you inquire about a recommendation, she will act like she is a personal friend of Raminus Polus and give you a small task: "A recommendation, from me? Well, of course. Raminus would naturally want my opinion, wouldn't he? This is a situation we can both benefit from, Associate. You do me a small favor, and I'll happily send along a glowing recommendation. If you can find J'skar, I'll write the recommendation immediately." She will then elaborate on the missing Khajiit, obviously more worried about her image than J'skar’s whereabouts: "He's disappeared. I mean he's really disappeared. No one here has seen him in days. Volanaro thinks maybe a spell backfired. If someone from the Council were to stop by, and find him gone, it'd look bad for me. I can't have that. Talk to the mages here, and see what you can find out. If you can make J'skar re-appear, you'll have your recommendation." After you have talked to Volanaro, stolen Jeanne’s Manual of Spellcraft and spoken with the now visible J'skar, she will say: "Found him, did you? Well, I suppose that's good. You'll have to forgive me... I seem to have misplaced something. Hmm. Yes, well, let's nevermind that. You've fulfilled your end of the bargain, though, so I'll fulfill mine. Raminus will have my recommendation. And don't you forget about me once you've finished your training! I'm sure we can help each other out!" If you found him without help she will instead say: "You've fulfilled your end of the bargain, so now I'll fulfil mine. Raminus will have my recommendation. Let's just keep this incident between us, okay? It might make... a bad impression." If you have collected all recommendations she will be delighted: "You've been to all the guild halls, haven't you? Well, then you're all set! Congratulations! You'll need to speak to Raminus Polus at the Arcane University now. Look at you, moving up in the world... how wonderful."

While Jeanne might be satisfied with her own leadership, the other members of the guild have quite a different opinion. Volanaro is particularly scathing: "With all due respect to our wonderful leader... She couldn't cast her way out of a paper sack, It's insulting that we're here, working for her, when she knows nothing. She's managed to butter up the right people just enough to keep her position, and there's little we can do about it. But we have our ways of coping with the situation." Selena Orania seems more forgiving, and will comment "I suppose I like her well enough. It's a shame she doesn't know more about her craft, though. Still, I don't quite think she deserves the hard time the others give her." J'skar offers an explanation for his constant pranks, saying "We just get tired of Jeanne lording her position over us, when she barely knows anything about magic." The other people of the guild also seem to be aware of Jeanne's lack of experience, as they will comment after you have helped her find J'skar:"Did you hear that someone played yet another prank on Jeanne Frasoric in Bruma? I don't know how she keeps falling for these things." The townsfolk of Bruma will also comment on her lacking leadership: "It sounds like there are an awful lot of problems at the Bruma guild hall. Jeanne does a poor job of running that place."