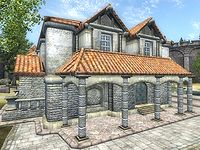 Heinrich Oaken-Hull's House is a house situated on the corner of Anvil's Chapelgate and Guildgate districts. The house itself is situated adjacent to Benirus Manor, and beside the Anvil Fighters Guild and the Chapel of Dibella. 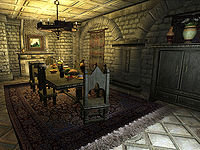 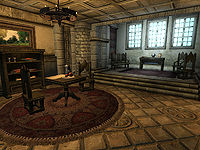 The front door opens to a well dressed dining table directly ahead and a cupboard to the right with food. To the left, there is a set of shelves with several ceramic and silver tableware and a smaller cupboard which holds even more tableware. The dining table holds several loaves of bread and a head of lettuce in a small basket, one bottle each of Surilie Brothers Vintage 399 and beer, two samples of crab meat, some cheese and a wide selection of fruit and vegetables. The table also holds an arrangement of both ceramic and silver tableware.

Along the southern wall is the entrance to the living area of the house. A small set of table and chairs can be found on the immediate left, which holds a copy of The Black Horse Courier, a bottle of Surilie Brothers Wine, along with another selection of fruit. A bookshelf found nearby holds two potions, a handbill for the local inn, along with several rare books; some titles include 2920, First Seed, Aevar Stone-Singer, and Palla, volume 2. Across the room holds another, smaller shelf that holds some gold as well as a copy of Ten Commands: Nine Divines. A second exit to the exterior of the house can be found directly beneath the staircase to the right, and the stairs lead directly upstairs to the second floor of the house, Oaken-Hull's Private Rooms, which is locked and can either be picked or unlocked via key. 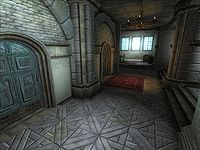 The entrance to the second floor opens up to relatively large, open plan quarters. Both Hasathil and Heinrich's bedroom is located in a separate room to the southwest, and holds a double bed. A cupboard containing upper-class clothing is located to the right, as well as a locked chest and a scroll of fire shell up above. To the left of the bed, a set of drawers also contains more upper-class clothing as well. On top of the drawers is a sample of nirnroot, a strong potion of personality, some gold, a locked jewelry box and several jewels; that of which includes a diamond, a flawed sapphire, and a flawed topaz.

Adjacent from the bedroom is a small living area, where the only items to note are the bottle cheap wine and several strawberries on a ceramic plate. In the nearby study area, a desk holds the Dagger of Weariness and copies of both Frontier, Conquest and Manual of Arms. A shelf directly across from the desk holds a bottle of cyrodilic brandy, a shipment letter, and a handbill for The Fo'c's'le. The northern area contains the guest quarters, which holds a single bed. There is also a set of drawers containing upper-class clothing to the right, with a black & burgundy outfit and a steel helmet placed on top, and directly beside the set of drawers is also a pair of gold trimmed shoes. To the left of the guest quarters is also a small dining area; of which the table holds a copy of Mystery of Talara, v 5. Behind the table however, is an incriminating letter which highlights Hasathil's secret relationship with Enilroth.